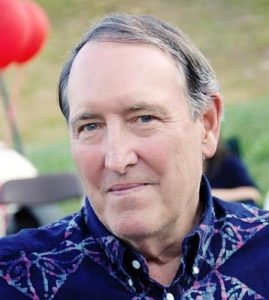 The memorial service will be at 2:00PM, Tuesday, February 27, 2018, at Covenant Presbyterian Church. The family will receive friends directly following the service in the Fellowship Hall.

Ned was born on July 22, 1939, to Ellen Williamson Davis and Paul Wynnedna Davis Jr. in Greensboro, NC. He grew up in Piney Flats, TN, attended Bristol High School and went on to attend Davidson College on a football scholarship, graduating in 1961. Ned met Adelaide Anderson of Morganton, NC, while she was a student at Queens College. They married a year after they both graduated and made Charlotte their permanent home.

Ned’s unwavering drive and his pursuit of the good life were evident early on. He earned his Eagle Scout badge as a teenager, his pilot’s license as a young man, and, later, a reputation for civic leadership in the greater Charlotte area. After helping to grow multiple small businesses, Ned founded and served as the CEO of The Colville Group.

He was a generous and active board member of a number of local non-profit organizations, including the Dowd YMCA, Habitat for Humanity and Sharon Towers. He served as an Elder in the Presbyterian church and a Trustee at Davidson College.

Ned was happiest gardening (aka working his children in the yard), reading, flying, skiing, playing golf, taking photographs and spending time with good friends and family. His can-do spirit and his commitment to service have left an indelible mark on Charlotte and those who knew him.

Ned is survived by his wife, Adelaide; his son Wynn Davis and wife Angie of Charlotte, NC; his daughter Katherine and husband Mark Brooks of Asheville, NC; his daughter Elizabeth and husband Scotty Utz of Asheville, NC; and nine grandchildren. He also is survived by his sister Bonnie Davis Kirkley of Fort Lauderdale, FL, and his sister Molly Davis Greene of Knoxville, TN. He is predeceased by his beloved dog “Emily Dickinson Davis.”

An online guestbook is available at www.heritagecares.com and provided by Heritage Funeral Home, Weddington Chapel.