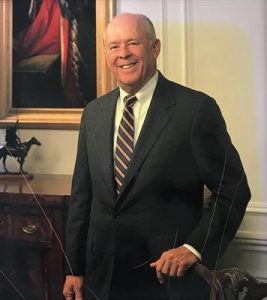 Bev was born in Augusta, Georgia, on November 9, 1927, the son of Mr. and Mrs. William Arthur Dolan.

He attended William Robinson Elementary School and graduated from the Academy of Richmond County. He then served a year in the Merchant Marines.

After graduating from the University of Georgia, he served two years in the United States Army. One year into his military service, he married Ada Alice Parramore from Valdosta, Georgia.

In June 1954, Bev and his brother, William (Billy) Arthur Dolan, Jr., founded the E-Z-Go Golf Car Corporation, which became the leader in the golf car industry. His long and successful association with Textron began when E-Z-Go was acquired in 1960.

During his career, Bev was president of E-Z-Go, Polaris, Homelite, and also became President, CEO and Chairman of Textron. Under his leadership, Textron purchased Excello, Avco, and Cessna, among other acquisitions, increasing Textron’s sales ten-fold in approximately five years.

Bev loved life and tried to fully enjoy each day. He loved Ada Alice and was quick to give her praise. He loved his sons Frank and William and their wives, Cathy and Nelia. The grandchildren were a delight to him.

Bev enjoyed outdoor activities with his friends and family. He was a “people person” and a champion for the underdog. He was a benefactor of Hale House of Augusta as well as for a number of individuals, with little or no fanfare.

In lieu of flowers, the family wishes contributions be made to the Hale Foundation at 402 Walker Street, Augusta, Georgia 30901.
Published in Charlotte Observer on Feb. 26, 2018