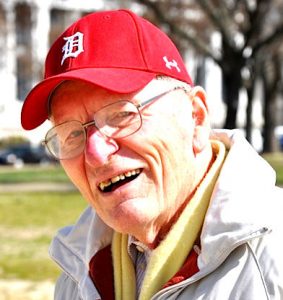 The son of a long line of Presbyterian ministers (seven generations before him), his commitment to the Presbyterian church was a lifelong mission, where he served as elder, teacher, and choir member.

Born to the Rev. Thomas Herbert Dimmock Sr. and Martha Belle Amis, he was a graduate of Davidson College and the University of Virginia – where he subsequently taught physics as well as at Wake Forest Univ.

He married Anne Hortense Pruitt in 1948 with whom he had four children, all of whom survive him: Jane (Dimmock) Cain of Davidson, Thomas Herbert Dimmock III of Hershey, Pa., David Dimmock of Baltimore, Md., and Jonathan Dimmock of San Francisco, Calif.

Herb’s career started in the Army, having served as a first lieutenant in World War II (14th Infantry, 71st Division), including participating in the liberation of Dachau, and serving as a temporary mayor in Germany.

His profession as a physicist took him to the aerospace industry where he patented a fuel cell for the rocket to Mars.

The last half of his career was spent in Northern Virginia where he served the Defense Intelligence Agency in matters related to missile defense. Herb loved to sing and play the piano – which he did nearly up until his day of death.

He was beloved as a Bible teacher and scholar, a passion which occupied him for at least 60 years of his life. Mostly, friends and family remember him for his gentle sense of humor, humility, warmth, and unusual ability to communicate interest in other people.

A lover of the outdoors and physical health, his greatest accomplishment, in his words, was raising a loving Christian family.

His funeral will be held at Lewinsville Presbyterian Church in McLean, Va., Monday, Feb. 26, at 2 p.m.

Charitable donations, in his memory, may be given to the Dimmock Memorial Fund at Lewinsville Presbyterian Church or to his nephew, Frank Dimmock’s, African missionary work through The Outreach Foundation at https://www.theoutreachfoundation.org/dimmock-frank. Cavin-Cook Funeral Home & Crematory, Mooresville, is serving the Dimmock family.

Condolences may be made to the family at www.cavin-cook.com.