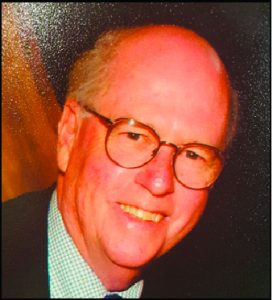 Walter was a 1959 graduate of Davidson College with an AB Degree in Economics. While at Davidson College, he was a member of the Beta Theta Pi fraternity, the Philanthropic Literary Society and Varsity Rifle Team.

Mr. Scott was employed in his family’s business, Scott Drug Company, for 12 years, serving as Vice President and Assistant Treasurer and was a member of the Board of Directors.

Mr. Scott was then employed by United Carolina Bank in Charlotte NC for 12 years as a Vice President and Commercial Lending Officer. Mr. Scott was retired from Cline & Co., Inc. serving as a Condominium Property Manager and collections manager.

Mr. Scott was a member of First Presbyterian Church, Charlotte Country Club (where his grandfather had been a founding member), The Mayflower Society, Military Order of the Stars and Bars and the St. Andrews Society.