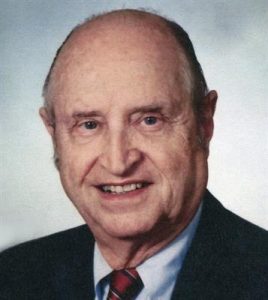 Irwin “Ike” Belk was born in Charlotte, North Carolina on April 4, 1922 to the late William Henry and Mary Irwin Belk.

He was predeceased by the love of his life, Carol Grotnes Belk, to whom he was married for 66 years. He was also predeceased by his brothers: Henry, John, Henderson, and Tom, and daughter-in-law Anne Belk.

Ike attended McCallie School with his brothers, followed by one year at Davidson College. He transferred to the University of North Carolina at Chapel Hill where he majored in business. He served two and a half years in World War II in the 491st Bomber group of the famed 8th Air Force.

Ike had a rewarding life as a businessman, philanthropist, civic leader, elected official and public servant. He served most of his adult life (over 50 years) as an executive with Belk Stores. He served on many corporate boards including textile mills, banks, distribution companies, and insurance companies.

Ike was elected and served four terms in the House of Representatives and Senate of the State of North Carolina legislature. One of his proudest accomplishments was to introduce the legislation creating UNC Charlotte as the fourth component of the University of North Carolina. He served many years as a member of the Board of Governors of the University system. Later in life, he served two terms as a United Nations delegate.

Irwin’s love of athletics and education led him to donate generously to create tracks and to procure acclaimed artists from around the world to sculpt mascots for college campuses. His goal was for the sculpture to be the largest of its kind in the world, and he did the research to make certain that was the case.

Ike was fond of saying, “The first objective in life is to educate your brains. Your brain can’t function if your body is not in shape.” His generosity extended to many colleges and universities where Ike and Carol established and funded scholarships, fellowships, libraries, classroom buildings and dining halls. He served on many university boards.

Ike served as District Governor of the Lions Club and as a member of the U.S. Olympic Committee and received the prestigious Olympic Order, an award presented by the International Olympic Committee. He served on the American Cancer Society board for over 40 years, receiving their highest honor, the Merit Award. He also received numerous honorary degrees.

Ike was a member and retired elder of Myers Park Presbyterian Church. He enjoyed traveling all over the world with his family and especially enjoyed deep sea fishing with his beloved wife, Carol.

Ike was an extraordinary and gracious host when Carol and he entertained their family, friends, and business and professional associates. He was a treasure trove of Charlotte, Mecklenburg, and the State of North Carolina history. Ike delighted in sharing his “history lessons” at every opportunity. His office staff admired and respected him. He abolished the custom of “secretaries bringing the boss coffee,” instead he brought them coffee.

A celebration of Irwin’s life will be held on Monday, March 5, 2018 at 11 am at Myers Park Presbyterian Church. The family will receive friends following the service in Oxford Hall. Burial at Elmwood Cemetery will be private.

The family is grateful to Elena and Joseph Magpayo for their loving dedication to both Ike and Carol, and to Barbara Potts, Carma Bennett, Karen Goins and Devante Finches along with the staff of the Cypress for their compassion and care.

“My father always taught us that those who were fortunate enough to possess or earn wealth had a special responsibility to both use it wisely and to share it with those less fortunate. If you don’t take care of this generation, the next one won’t be worth shooting. My advice is to throw the roses where you can smell them. Don’t wait until you’re dead and gone. Do it now.” — Irwin Belk