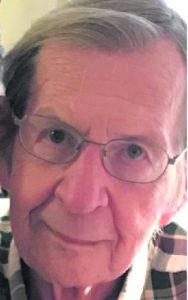 Charles Davidson Hall of Irmo, SC, formally of Charlotte, NC passed away at home on February 26, 2018 of natural causes. He was born in Belmont, NC on August 31, 1932 to Matthew Neagle Hall and Carolina May Hall.

Charles graduated from Belmont High School in 1950 and earned a business degree from Davidson College where he was a member of Phi Kappa Gamma Fraternity.

Charles served as a U.S. Naval Commander during the Korean War stationed in Norfolk, VA where he met the love of his life, Julia Ann Royster Hall.

After serving his country, he entered the business community, rose to vice president of the Dyed Yarn Division of American Effird Mills, Mt. Holly, NC and eventually became president of American Yarn Association of Charlotte, NC.

He was preceded in death by his parents, and is survived by his beloved wife of 60 years, daughter Clare Ann Hall Effinger (Tom), and grandchildren Connor Davidson Effinger, and Carolina Rose Effinger. He was respected by all for his acumen of current events.

He enjoyed traveling with Julia Ann, visiting his daughter and watching his grandchildren grow up on Lake Murray with the beautiful sunsets.

He will be missed by family and friends as a true southern gentleman.

In lieu of flowers, donations may be made to St. Jude Children’s Hospital.