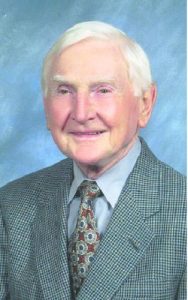 A memorial service for Charles Lemmon Shaw, who died Wednesday, January 3, 2018, will be held at First Presbyterian Church Sunday, January 7, 2018 at 3 o’clock with the Reverend Nick Cheek officiating.

Charles Shaw, affectionately known as Flop, spent the first five years of his life in Alcolu when his father worked for his grandfather, David Wells Alderman, in his timber business.

Flop worked at Shaw Lumber Company his entire adult life and served as president of Carolina Lumber Dealers Association. Charles Shaw graduated from Edmunds High School and Davidson College. As a Davidson freshman he joined the U.S. Army during World War II and was sent to Anzio, Italy where he received the Purple Heart.

He was a lifelong member of First Presbyterian Church where he served as a Sunday School teacher, Chairman of the Board of Deacons, Church Treasurer, Clerk of the Session, Church Trustee, and Elder Emeritus.

He was president of the YMCA Board of Directors and selected as Humanitarian of the Year. He served as on the board of the Salvation Army

The family has chosen Bullock Funeral Home for the arrangements.