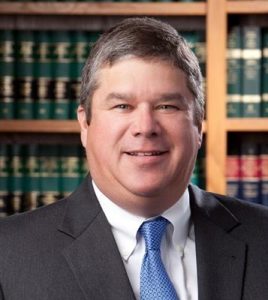 James Fredrick Wood III 61, passed away peacefully on January 2, 2018 following a short illness, surrounded and comforted by his family.

Jim, as everyone knew him, was born to Marian Prince Wood and the late James Fredrick Wood, Jr. and was a native Charlottean.

He was born on February 29, 1956 and was a “leap year baby.” Some who knew him wondered whether his “true” age (15 1/4) was a truer reflection of his spirit than his chronological age.

Jim attended Myers Park High School. Upon graduation, he attended Davidson College where he earned a BA in Economics. He was a proud member of the Sigma Phi Epsilon where his fraternity brothers became his brothers in life. Jim was a star swimmer for the Davidson swim team, but he played many intramural sports including tennis, volleyball and soccer. He remained a huge sports enthusiast throughout his life.

Upon graduation from Davidson, in 1978, Jim attended Wake Forest University School of Law, receiving his J.D. in 1981. Despite the fact that he was a Davidson Wild Cat and a Demon Deacon, he was a professed and diehard Tar Heel fan. Jim and his father spent countless hours together watching the Heels evolve into one of the most well respected basketball programs in the nation. When the Carolina Panthers were born, he promptly became a loyal supporter and fan.

Jim returned to Charlotte after law school to practice law, practicing for many years and becoming a partner with Baucom Claytor Benton Morgan and Wood. Jim’s areas of practice included civil litigation and insurance defense with a focus on insurance fraud, Personal Injury and Medical Malpractice, Construction Litigation , Coverage and Bad Faith.

Jim’s clients included many large insurance companies as well as private clients. Throughout his career, he taught classes and seminars for the Justice Academy and was a member of the North Carolina Bar and a many other Bar associations.

In the legal profession, Jim was unique because he regularly practiced on both sides of the litigation aisle, representing plaintiffs and defendants throughout North Carolina. He came very close to his “bucket list” goal of trying cases in all 100 North Carolina counties. Both the bench and bar respected his ability and trusted his word. Jim practiced law with style and grace, rarely resorting to tactics he felt were beneath him or the Bar. In fact, many referred to him as a “true Lion of Bar.”

Jim was always available to associates or colleagues to discuss difficult legal problems. He was able to quickly absorb a factual situation and see a path toward resolution. Inside or outside the courtroom, his powers of persuasion were dogged without being belligerent and always well based on face. Jim was even able to persuade his wife, Wendi Wood (a sometimes pushy Demon Deacon fan) to watch and support the Heels, which was no small task.

When Jim met Wendi, he began a chapter in his life that brought joy in ways that the practice of law never could. Jim and Wendi married in 2008. Though Jim was never blessed with children of his own, he quickly became “Dad” to Wendi’s daughter, Taylor, and relished the job of parenting and reveling in the successes achieved by Taylor. Though he may have been happiest when hunting, fishing and cooking with his brother- in- law, Ab, from a cabin deep in the woods, the joy of being married to Wendi and raising Taylor was evident every time he talked about them.

Jim will always be remembered to the legal community, they lost a colleague willing to share his wisdom. To his friends, they lost a brother. To his family, they gained a Guardian Angel. The lives of Jim’s family, friends and community were made richer for Jim’s life among us as a dedicated husband, father, brother, son and friend.

A service will be held at Davidson United Methodist Church, 233 South Main Street, Davidson on Saturday, January 13th, 2018 at 3:00 pm with visitation following the service.

Memorials may be made to The Make A Wish Foundation

, 1131 Harding Place, Charlotte, NC 28204 or nc.wish.org. Online condolences may be addressed to carolinafuneral.com. Carolina Funeral Service & Cremation Center is entrusted with the arrangements.

Published in Charlotte Observer on Jan. 7, 2018