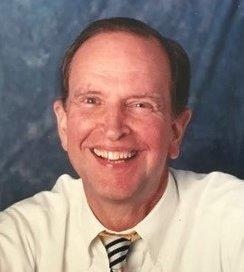 William Anthony “Bill” White, Jr. died Thursday, January 11, 2018. He was 87. His last days, like his life, were filled with family, friends, laughter and music – from Presbyterian hymns to bluegrass to the Davidson College fight song.

As an avid reader – and former high school columnist – of the Charlotte Observer, Bill would have preferred a more humble and succinct summation of his life; however, without his red pen to pare our prose, we’ll take the liberty of expanding upon his oft-expressed hope that his life could be defined by two words: he loved.

He was born February 5, 1930 in Charlotte, NC to the late Bess Denny White and William A. White, Sr.

Bill loved school and loved to learn. A proud product of Charlotte public schools, he attended Dilworth Elementary and A.G. Junior High, and graduated from Central High School in 1948. Bolstered by the encouragement and support of community and church leaders, Bill worked his way through Davidson College.

There, as editor of The Davidsonian, member of the track team, and a brother of the Kappa Sigma fraternity, he established lifelong friendships. He graduated in 1952 with a degree in business, with Phi Beta Kappa and Omicron Delta Kappa distinctions. He was awarded one of the first Morehead Scholarships to attend graduate school, receiving his M.B.A. from UNC – Chapel Hill in 1953.

He fulfilled his military obligation in the army at Ft. Benning, GA, an experience that provided treasured friendships and colorful stories. It was in nearby Columbus that he began his lifelong ministry teaching high school Sunday School.

Like his collegiate and post-graduate experiences, Bill’s business career was marked by hard work and good fortune. He was profoundly grateful to those who led him to or through open doors to wonderful opportunities. He later reflected, “I cannot but believe they were the hands of God in the creating of the life that has been mine to enjoy.”

After starting out at the Charlotte Chamber of Commerce, he went to work for the Rouse Company in 1957 as a leasing agent and then manager of the Charlottetown Mall. He became a Vice President, overseeing major real estate development projects throughout the country.

Bill married Betsy Smith in 1961, a feat that was, in his words, “beyond the highest hopes I could have conjured up.” They had three daughters and created a family “rich in love.” Of his life with four women and a female dog, Bill often quipped, “If the good Lord thought there needed to be another man in the house, he would’ve sent one!”

In 1970, backed by the Springs Company, he formed real estate development company Charter Properties and assembled what he called a “grand team” of coworkers. A passionate perfectionist with deep integrity, he held himself and others to the highest standards. Bill loved Charlotte and considered it a great privilege to help mold his “sleepy little town” into a big city. He was a visionary who believed fervently in the revitalization of uptown, particularly enjoying his involvement in the Bank of America/Founder’s Hall/Blumenthal Performing Arts Center project.

As a man of deep faith, Bill also devoted his time and leadership to causes he loved; first and foremost to Myers Park Presbyterian Church, and countless others including Davidson College, the Salvation Army, The Charlotte Housing Authority, the Good Fellows Club and Union Presbyterian Seminary.

For over 50 years, he found great joy in teaching high school students on Sunday mornings at Myers Park Presbyterian and mentoring them in their faith journeys. His interest in sustaining the church with vibrant leadership inspired him to lead the development of Union Presbyterian Seminary’s Charlotte campus.

In a commencement address at the seminary, he expressed his own conviction that “whatever we teach, whatever we write, wherever we work, we must do it first as disciples. And it must be apparent by words and by deeds that we are disciples by the way we love.”

And oh, how he loved- his wife, Betsy, his girls, his sons-in-law, his six grandchildren- and how we loved him! We cherish his quick wit and self-deprecating humor; his corny jokes (punctuated by a self-congratulatory leg kick); his bedtime, dinnertime, ALL-the-time stories; his tender heart and keen awareness of others; his “food for thought” memos in left-handed chicken-scratch; his nicknames for those he loved; his smooth moves on the dance floor; his tennis whites and old-school sweatbands; his eternal faith in Davidson Athletics; his loyalty to dear friends and acquaintances; his silly banter with his grandchildren; his encyclopedic knowledge of “absolutely everything;” his gentlemanly southern charm.

The family is profoundly grateful to the compassionate staff at Sharon Towers; Bill’s caregivers and companions: Barbara Huntley and the staffs of Home Instead and Hospice & Palliative Care.

A worship service in celebration of Bill’s life will be held at 2pm on Friday, January 19, 2018, at Myers Park Presbyterian Church, 2501 Oxford Place, Charlotte, NC. A reception will follow in Oxford Hall.