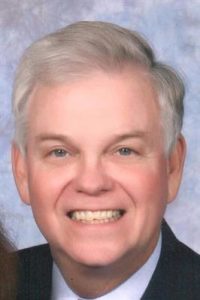 Frank Wise, 69, quietly passed away on June 11, 2017, in the Augusta University Hospital surrounded by his family after a difficult battle with leukemia.

Frank was born August, 26, 1947, in Americus, Georgia, the second son of J.C. and Virginia Easterlin Wise, and brother of Roy T. Wise.

He grew up and attended school in Plains, Georgia. He attended the University of Georgia for two years, before transferring to Davidson College.

Upon graduation, having enlisted in the ROTC program at Davidson, Frank served in the Army as a captain and was stationed at Ft. Benning, Georgia.

Frank then attended Harvard and earned his Masters in Business Administration from the university. Subsequently, he was hired by Dixie Capital, a small business investment corporation, where he worked for 3 years before becoming a management consultant for Kurt Salmon Associates.

After a stint there, he was hired by the Graniteville Company where he worked in New York City, before moving to Aiken in 1987 to work for the company locally. He then left Graniteville to work at Westinghouse Savannah River as a financial analyst where he analyzed budget data for the site until his retirement in 2013.

Frank was an organizer, especially when it came to his two daughters and soccer. When he was employed in New York City and lived in Fairfield, Connecticut, he started the first girls’ soccer program in Fairfield to ensure his young daughters had the same opportunity to play competitive soccer that the young boys did.

When he moved south to Aiken, not only did he jumpstart the girls’ soccer programs at both Aiken High School and South Aiken High School, but he also began the Aiken Soccer Club, which served both the boys and the girls. Frank was the moving force behind the Aiken Soccer Classic, a tournament which began in the mid 1990’s with 60 teams from around the Southeast and grew to over 230 teams at its peak.

He attended St. Thaddeus Church and served as Sunday school teacher, junior warden and senior warden for the Vestry. Additionally, he served as Chairman of the Board of the Mead Hall School. Frank had many varied hobbies which included golf, gardening, painting and cooking. However, the most important time Frank spent was involving himself with family activities.

Not only did Frank love spending quality time with his wife, Kathy, around the house, and when they traveled together, but he also would drop anything he was doing to help his two daughters, Betsy and Laura, whether the task was a home project, finances or just babysitting his grandchildren.

Speaking of whom, Frank’s treasure here on earth was absolutely spending time with his grandchildren, whether he was watching a school performance, a sports contest, or just on his knees horsing around with each, and all, of them. He will be missed by all, but especially by his grandchildren.

Frank will be buried in the Lebanon Cemetery in the Wise family plot in Plains, Georgia, in a graveside service on Saturday, June 17, 2017, at 3:00 PM.

The family will receive friends at the Shellhouse Funeral Home on Hayne Avenue Monday, June 19th, 2017, from 5pm to 7pm.

A memorial service will be held at St. Thaddeus Church with The Rev. Grant Wiseman officiating on Tuesday, June 20th, 2017, at 11am. The family will receive friends following the service in the Stevenson-McClelland Building.

Published in The Augusta Chronicle on June 15, 2017