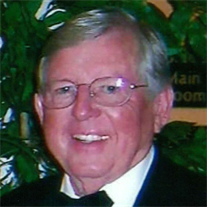 Jack was born May 3, 1930 in Bristol, VA to Thomas Edward Arnold and Zella Moore Arnold. He graduated from Virginia High School and pursued post graduate work at Fishburne Military Academy in Waynesboro, VA where he ranked first in his class.

He received a business administration degree from Davidson College in 1952. After graduation, Jack served in the U.S. Air Force and taught air weather services at Chanute Air Force Base in Rantoul, IL from 1952-1956.

Jack married Dorothy Senter Arnold in 1954. They had two sons, Tom and Jim, and enjoyed 32 years of marriage.

June 6, 1987, Jack was again blessed by marriage to Nancy C. Arnold, who has been a devoted wife and companion for almost 30 years. Nancy’s children, Ray and Kathleen, came into the family and Jack became a supportive father figure to them.

Jack spent 35 years with Moore’s Quality Snack Food. He was Vice President when the company sold in 1989. Jack’s grandfather, J.W. Moore began the business in the basement of his home. Jack worked in every aspect of the business, but his main expertise was production. As Vice President in that area, his main goal was to produce the highest quality products possible.

Joe Arnold, Jack’s brother, joined the company in 1960 and together they built and expanded several major facilities. Their annual sales and employment increased throughout eight southern states.

At one time Moore’s employed over 700 people and was a generous supporter of the Bristol community. Sons, Tom and Jim, also joined in the family business. Jack was a member of the Snack Food Association and served as President of the South Eastern Region Association in 1976.

Jack was an active member of State Street United Methodist Church from age 11 until his death. He presented the organ in the chapel in memory of his mother and father. Jack has been described as a true Virginia Gentleman, gracious, unassuming and generous to a fault.

Jack shared a deep love of young people and devoted his community service to institutions that serve children. Jack was the principal donor to the Children’s Advocacy Center of Sullivan County, given in loving memory of Dorothy Arnold.

Jack supported the Sequoyah Council Boy Scouts of America. Jack’s mother, Zella Moore Arnold, who helped establish the Boys Club, worked tirelessly for 30 years and Jack continued her legacy by becoming an active Board Member in 1990, serving what is now Boys and Girls Club of the Mountain Empire.

Jack was often seen at the club visiting, observing and interacting with the young members. Jack said, “Throughout a child’s life and especially during the time that he or she is with the Boys and Girls Club, that child will have a hand to hold on to.” Jack served as President of the Board in 1993 and currently as President Emeritus.

He has been honored with several service awards from the organization: including the Man and Boy, Man and Youth Award and both the Tennessee and Virginia Board Member of the Year awards, and the Zella Moore Arnold Award. He also was honored with a Life Membership.

To commemorate his service to the youth and families in the community, the City of Bristol, VA declared December 1, 2000 as Jack Arnold Day and the club named the youth activities building the “Jack Arnold Teen Center”.

Mr. Arnold has been a long-time supporter of Emory & Henry College. In March, 2008 the college recognized his business entrepreneurship and civic leadership by awarding him a Charter Day Citation.

Other honors include, being named a Paul Harris Fellow by the Rotary Foundation of Rotary International, Silver Eagle Award from Sequoyah Council Boy Scouts of America and outstanding Alumnus for the class of 1952 from Davidson College

Jack had a lifelong fascination with airplanes, both in their construction and in the cockpit as a pilot.

The family is most grateful to Michelle Boling, Jack’s care giver five days a week for six and a half years and Beth White for weekend care of six years which allowed Jack to be at home. These women served Jack with caring patience and endearing devotion.

The family would like to thank Health South of Bristol and National Health Care where Jack was a resident when he died. The staff, nurses, and techs at each facility offered kindness, skill and attentive care.

Sharon Ramsey was a recent loyal care giver. Thank you to Dr. Fred Greear, Jr. and Dr. Bert Smith for their encouraging and outstanding medical care.

Special Friends include, Andrea Wrightenberry of Burlington, NC; former employees of Moore’s Quality Snack Foods; and the staff and board of The Boys and Girls Club.

A Celebration of Life service will be held Saturday, April 22, 2017 at 11:00 a.m. at State Street United Methodist Church with Senior Pastor Jonathan Jonas officiating. Receiving of friends will follow in the Fellowship Hall. The Graveside Service will be private.

In lieu of flowers, contributions may be made to the Boys and Girls Club of Bristol, c/o Mr. Dick Collins, P.O. Box 1074, Bristol, VA 24203, State Street United Methodist Church Music Fund or Building Fund, 300 W. Valley Dr., Bristol, VA or to a charity of your choice.