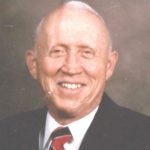 Born May 23, 1930 in Caldwell County, he was the son of the late Parks C. Underdown, Sr. and Hazle Teague Underdown.

In addition to his parents, he was preceded in death by his sister, Dorothy Underdown Simmons and a daughter-in-law, Sara Shell Underdown.

Neil was a 1952 graduate of Davidson College with a BS degree in Business Administration and received his MBA from UNC Chapel Hill. After graduation, Neil joined his father in 1954 at Hickory Springs Manufacturing Company but soon after went on to serve his country in the U.S. Navy until 1958 leaving with the rank of Lieutenant J.G.

Following his discharge, he returned to Hickory to serve his family’s business for more than 48 years where he served as President for 28 years and as Chairman for an additional 12 years. He deeply appreciated all of his employees and saw to their welfare.

He also served on the Board of Directors of Snyder Paper Co. for many years.

Neil was very active in his community, serving the City of Hickory on its Human Relations Council, Transportation, and Foresight committees and on the board of the SALT Block. Additionally, he served on the Board of Directors of Frye Regional Medical Center and on the Wachovia Southern Region Board.

Other service included on the Liberty Mutual Insurance Southern Advisory Board and as a member of the Catawba County Foundation for the North Carolina School of the Arts. He was also active in the Hickory Rotary Club and various other state and regional boards and committees.

Neil served First Presbyterian Church of Hickory as Elder, Deacon, Clerk of Session, and as a Sunday School teacher. He was active on numerous church committees and served as commissioner to the General Assembly of the Presbyterian Church in the United States.

Neil’s first love was for his wife, Joanne, and his family. He loved to dance, play golf, attend ballgames and laugh with his friends, especially at the Hickory Coffee Club. Neil’s wit and sense of humor served him well throughout his life and helped define who he really was; a philanthropic, compassionate, fun-loving and extremely dedicated man.

The Underdown family extends deepest appreciation to all the compassionate caregivers from Home Instead and Catawba Regional Hospice who have played an integral part in our journey.

After a private interment at Oakwood cemetery, the funeral service will be held at 2:00 PM Saturday, January 28, 2017 at First Presbyterian Church in Hickory with the Rev. Dr. Whit Malone officiating. The family will receive friends following the service in the fellowship hall at the church.

In honor of Neil’s love for Davidson College and UNC, the family requests that those who wish wear red or Carolina blue.

The family requests in lieu of flowers memorials may be made to Catawba Regional Hospice – 3975 Robinson Rd.; Newton, NC 28658 or to the Scholarship Fund or Good Samaritan Fund at First Presbyterian Church, 237 2nd St. NW; Hickory, NC 28601, or to the charity of one’s choice.