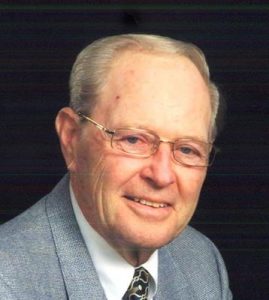 Theodore B. (Ted) Sumner Jr., a 33-year banking veteran and former Vice Chairman of First Union Corporation, died January 28, 2017 in his home. He was 88.

Mr. Sumner was born in Asheville, N.C. on July 9, 1928. The son of Lovie Winn and Theodore Sumner, he graduated from Georgia Military Academy and then Davidson College in 1950.

Mr. Sumner served in the Korean War in the First Calvary Division from 1951-53 as a second lieutenant. In 1953, he joined Union National Bank and began his steady rise through the managerial ranks. When the bank began to merge, he served as city executive in Hendersonville and Gastonia, senior vice president in Asheville and executive vice president in Greensboro.

He also served as president of the Greensboro Chamber of Commerce. Mr. Sumner was appointed regional executive in 1969, and three years later was named statewide officer in charge of all branch offices.

In 1973, Mr. Sumner became chairman of First Union National Bank and ten years later was named vice chairman of First Union Corporation where he served until his retirement in 1986. Mr. Sumner helped lead the bank’s interstate expansion and organized banking and political support for the Southeastern Regional Banking Compact, a key step in what was eventually to become nationwide branch banking.

He was dean of the North Carolina Banking Institute at the University of North Carolina at Chapel Hill and served on the NC Economic Development Board under Governor Jim Hunt.

Mr. Sumner was the board chairman of Chauncey Group International, Ltd., and served as a director of First Union Corporation, Parkdale Mills, Dana Corporation, the Heinemann Medical Research Center, Duke Comprehensive Cancer Center and the Methodist Foundation of Western North Carolina. Mr. Sumner was a member of Quail Hollow Club and The Country Club of North Carolina.

Five years after his bank retirement Mr. Sumner capitalized on his keen interest in international business affairs by founding Madison Financial Group. He chaired the firm as it worked with financial institutions along the eastern seaboard and in Canada, Poland, the Ukraine and Latvia.

Mr. Sumner’s work included partnering with Lech Walesa to organize a bank in Poland and helping modernize the infrastructure, procedures and technology of a Kiev bank after the Cold War ended.

The family would like to acknowledge the special care he received by the nurses and staff at Southminster. Loretta, Shirley, Anna, Michele, Jackie and Caroline

Mr. Sumner is survived by his wife of 64 years, Ruth (Patsy) Moser Sumner; his daughter Stacy Sumner Jesso and her husband John of Rocky Mount; and his son Theodore B. Sumner III of Raleigh.

A memorial service will be held at 2:00 PM Wednesday, February 1, 2017 at Myers Park United Methodist Church with The Reverend Dr. James Howell officiating. The family will receive friends in Jubilee Hall following the service. Interment will be private.