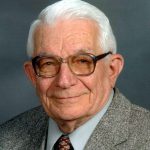 He married Dolores Eisele Oct. 12, 1963, and they celebrated their 53rd wedding anniversary a few weeks ago.

He is also survived by his sister, June Sink Rummage and her husband, Wayne; as well as his brother, Henry Sink and his wife, Lou.

Numerous nieces and nephews will remember their uncle Joe with funny stories and fond memories. Joe is predeceased by his beloved nephew, Richard Sink.

Joe was a 1947 graduate of Mooresville High School and a 1951 graduate of Davidson College, where he majored in math and business and played many hands of bridge.

Joe was honored to serve 22 years in the U.S. Air Force. He enlisted following college graduation in July 1951. He completed basic training at Lackland Air Force Base in Texas, then entered the 2-month Aviation Cadet Navigator program in Jan., 1952 at Ellington AFB in Texas.

He received his wings and commission as a Second Lieutenant in Jan., 1953, followed by B-29 Command Crew Training at Randolph AFB, Texas.

His military career also included 9 months as a student at the Air Command and Staff College, many staff assignments at Bomb Wing level in the Strategic Air Command, 12 months in Vietnam, and a two-year assignment as an operations officer at the Alternate National Military Command Center with primary duty at an underground facility.

Joe retired in the fall of 1973 as a Master Navigator with the rank of Lieutenant Colonel. After retiring from the Air Force, Joe was privileged to work in an interesting and challenging job as a computer programmer for Duke Power Company in Charlotte until his retirement in October 1986.

Joe was a lifelong Lutheran and a member of Holy Trinity Lutheran Church in Troutman, NC.

He requested that anyone wishing to celebrate his life do so by making a donation to the charity of their choice.

The family thanks all who have offered prayers, support, meals, and love during Joe’s illness.

They also thank the wonderful people from Hospice of Iredell County who made it possible for Joe to spend his last eight weeks at home.

A Celebration of Life will be held at 2 p.m., Sunday, Nov. 6, at Holy Trinity Lutheran Church, Troutman.

The family will receive friends immediately following the service. Cavin-Cook Funeral Home, Mooresville, is serving the Sink family. Condolences may be made to the family at www.cavin-cook.com.