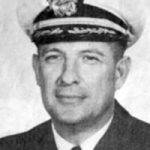 The Reverend Doctor Eugene Baughman Davis, 83, passed away on Monday, October 31, 2016 at the Village on Campbell in Burgaw, N.C. Born on July 13, 1933 in Mt.Olive, NC, he was the youngest son of the late Samuel Moseley Davis and Grace Lynch Davis.

A lifelong scouting and sports enthusiast, as a young man, Gene was an Eagle Scout with bronze and silver palms, the captain of his high school football and basketball teams, and played football in college.

He followed his calling and entered the US Navy as a Chaplain in 1959 and served his country for 23 years. For his extraordinary service in Vietnam with the Third Marine Division in 1966 and 1967 he was awarded the Legion of Merit. This was the first awarding of this exceptional medal to a Navy Chaplain serving with Marines on a battalion level in the preceding three wars.

Early in his military career he was the Chaplain on a ship which was attacked by pirates on the high seas. He was instrumental in negotiating with the pirates to prevent an international incident.

He served as Chaplain for a group of ships that participated in a South Atlantic Friendship tour. While in South Africa he opened the first Parliament of South Africa with prayer.

After retiring from the Navy in 1983 he served as interim pastor at several Presbyterian churches in the area.

He was preceded in death by his two beloved brothers, Samuel Moseley Davis, Jr and William Lynch Davis.

The funeral service was held at First Presbyterian Church, Jacksonville, NC on Friday, November 4, 2016 at 11:00 AM with burial following the service at the Starling Family Cemetery (Queen’s Creek Methodist Church Cemetery) in Hubert, NC.

Visitation was held at Jones Funeral Home in Jacksonville on Thursday night from 6-8 p.m.