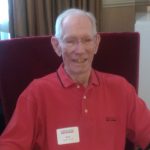 A graduate of Huntington High School, Jack enlisted in the Navy in 1946. He graduated with a BS degree from Davidson College in 1952, and later that year married Phyllis (Phyl) Smith of Huntington, WV.

They moved to Richmond, VA where Jack received his Bachelor of Divinity degree from Union Theological Seminary in 1955, and a Master of Theology in 1957.

He was called to pastor the Chadbourn Presbyterian Church in Chadbourn, NC and later became the first director of Camp Calvin, Atlanta Presbytery’s camp and conference center from 1960 to 1965.

The family moved to Bloomington, IN where he earned a M.A. and a Ph.D. at Indiana University. While there, he was the Protestant Chaplain to the Crane US Naval Ammunition Depot in Crane, IN.

In 1968 Jack became a professor at Clemson University in the Department of Parks, Recreation and Tourism Management, a position he held until 1991 when he achieved Emeritus status.

During his years at Clemson, he was selected as the director of Calhoun College, the Honors Program. In addition, he was Assistant Dean of Undergraduate Studies.

While living in Clemson, he also served as the installed pastor at Bethel and later at Richland Presbyterian churches.

At various times he served as interim pastor at Presbyterian churches in Walhalla, Seneca, Pickens, Liberty, Midway, North Anderson, as well as the Thornwell Home for Children. He was also a moderator at Foothills Presbytery.

Additionally, Jack and Phyl were co-directors of Rockbrook Camp for Girls in Brevard, NC from 1968 to 1972.