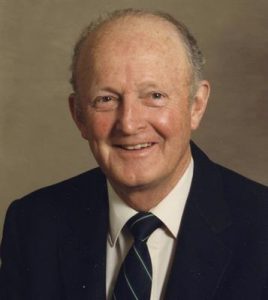 Surviving are his wife, “Pat” Elinor Kuhn Butt, to whom he was married for 65 years, their son, David Butt and his wife Amy of Barboursville, Va., their daughter Karen Broaddus and her husband Richard of Woodberry Forest Va., four grandchildren, Aaron Butt, Anna LaRochelle, Jessica Broaddus and Eliza Broaddus and six great-grandchildren.

Mr. Butt served in the Army Air Corps during World War II as a flight engineer/tail gunner on a B-24 based in Italy. His group flew 50 missions, bombing the Polesti Oil Fields in Romania, then took part in D-Day by bombing the marshalling (railroad) yards in Paris to prevent the Germans from sending trains to the Normandy coast.

He graduated from Davidson College and then from the College of William and Mary with a Master’s in Education Administration. His first teaching experience was at Rabun Gap Nacoochee School in Georgia as a high school teacher and dean of boys in the dormitory.

Mr. Butt’s professional career continued in several locations in Virginia – Mecklenburg County as principal of Boydton High School, then General Supervisor in the county office, Director of Instruction, then Interim Superintendent, for the city of Fredericksburg, Superintendent of Orange County Schools and culminated with 19 years as Superintendent of Loudoun County Public Schools.

Mr. Butt brought about full integration of Loudoun County Public Schools during the 1969-70 school year. When he retired in 1988, Mr. Butt was the longest-serving superintendent among Virginia’s 140 school divisions. Fourteen new schools were built during Mr. Butt’s tenure.

In addition, kindergarten, vocational and adult education, special education and the middle school and alternative school programs were started when he was superintendent. He served as an Elder in the Presbyterian Church.

A memorial service will be held at 2:00 pm on Saturday, September 24, 2016 in Lingle Chapel at Davidson College Presbyterian Church. A committal service for the family will be held at the Columbarium after the service. Visitation will be at The Pines at 4 p.m.

Friends may offer condolences to the family at www.raymerfh.com.