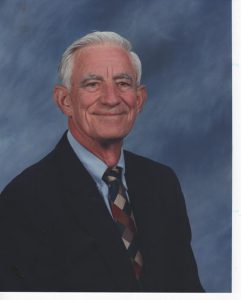 Charles “Charlie” Walter Patterson, 92, of Charlotte, passed into the arms of his Savior Jesus Christ on Saturday, September 18, 2016 surrounded by loved ones at Sharon Towers.  Charlie was born August 24, 1924, in Charlotte to Onnie and Buford Patterson.

He graduated from Central High School in 1942, and then later from Davidson College in 1948, after serving as a pilot in the Army AirCorp, where he was stationed on Attu in the Aleutian Islands.

In 1998, Charlie was later awarded the Distinguished Alumni Service Award by Davidson College. For many decades he could be spotted front and center at Wildcat games.

Charlie was married to Elsie Caroline Blackburn for 42 wonderful years until her death in 1990. In 2001, he married Betty Beall, with whom he spent 15 joyful years prior to his death. Mr. Patterson was employed as President of Ballabox Company in Matthews until his retirement in 1993.

Charlie was a lifelong member of First Presbyterian Church, where he was Chairman of the Board of Deacons, and elder, and Superintendent of Sunday School.

One of his favorite contributions to the church was serving as a  ‘greeter” on Sunday mornings for 25 years. Charlie never met a stranger-he was known for his huge smile, booming laugh, warm personality, and ability to find something in common with everyone.

He was an avid gardener, loved volleyball and golfing with friends, fishing, hunting with his son-in-law, and photography. Above all else, Charlie loved his time with family. He was happiest on holidays and annual family beach trips to Sunset Beach.

A celebration of his life will be held at Monday, September 26th at 2PM at First Presbyterian Church in Charlotte with Rev. Katherine Kerr officiating. The family will be greeted following the service in the Wood Fellowship Hall.