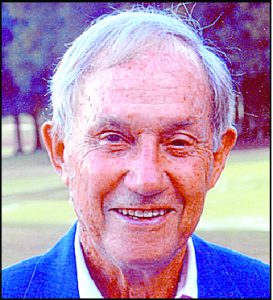 John Milton Archer III, 82, passed away on Tuesday, July 12, 2016 at his home in Charlotte, with his three children at his side.

Born Sept. 3, 1933 in Knoxville, Tennessee, he was the son of the late John Milton Archer Jr. and Beatrice Payne Archer. He spent most of his life growing up surrounded by the beautiful mountains of Macon County in Franklin. He graduated from Franklin High School, where he was the quarterback of his high school football team.

After receiving a football scholarship to Davidson College, he played one year there before transferring to UNC-Chapel Hill where he completed a degree in Pediatric Dentistry. He later continued his education to expand his dental practice into orthodontics.

His career as the “favorite” and “best” pediatric dentist in Charlotte spanned more than 35 years. John was a Sigma Chi at UNC-CH and also a member of the Delta Sigma Delta dental fraternity. He was president of the UNC Dental Alumni Association, as well as president of the Southeastern Society of Pediatric Dentistry.

As a longtime Charlotte resident, John was very involved with the community around him. He was a member of Myers Park Presbyterian Church, where he was an elder and a deacon, where he also enjoyed Bible studies and small groups, volunteering for Room in the Inn and travelling to Malawi for mission work. He spent time helping others at the soup kitchens and homeless shelters in Charlotte.

John was a former president of the Rotary Club of North Charlotte. He was a member of Charlotte Country Club, since 1967, and so enjoyed tennis, swimming and dining, but his true love at CCC was golf. His golf group, the RODS (Royal Order of the Dew Sweepers), was near and dear to his heart, and he maintained these close friendships until the very end.

John was passionately involved with Myers Park Trinity Little League baseball as a coach, referee and umpire for over 15 years. John was a family-centered man who appreciated and enjoyed having his 3 children and their families growing up in Charlotte.

He had many hobbies and loved sharing them all with his family (and some lucky friends). Besides golf, he loved long walks, hiking, camping, gardening, biking, rafting, skiing with family and friends, tennis, volleyball and family beach trips.

Many special memories with family were created in the North Carolina mountains. He longed for roaring fires at Hillcrest Circle in Franklin. He loved picking blueberries and blackberries and then making cobblers with his grandchildren. “Dadoo,” as he was called by all the grandchildren, taught all the young people the “Rhododendron” song to sing and entertain them on many hikes. That made us all smile and laugh.

He was a lifelong Tar Heel inside and out, a marathon runner in his earlier days and had special canine friends “Rusty-dog” and Britty. He loved “pampakes” with the grandchildren.

He was predeceased by a second wife, Mebane McDonald Reed Archer and is survived by her children, Tisha Reed Hardcastle (Bill) of Dallas, Ashley Reed Walsh (Kevin) of Atlanta, Rusty Reed (Kara) of Santa Barbara, California; and grandchildren Brooks and Will Hardcastle, Reed, Tally and Michael Walsh, and Brooks, Cooper, Logan, and Dashiell Reed.

A visitation will be held from 5-8 p.m. Friday at the home of Ellen and John M. Archer IV, 717 Hempstead Place, Charlotte. A service to celebrate John’s life will be held at 2 p.m. Saturday, July 16 at Myers Park Presbyterian Church, 2501 Oxford Place, Charlotte, NC. Family will receive friends in Oxford Hall immediately following the church service on Saturday.