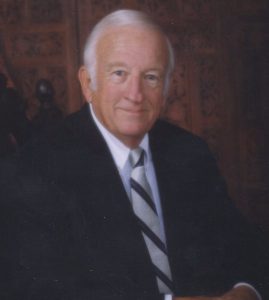 Dr. George Irvin Richardson, 86, of Reidsville, NC, went to be with the Lord Monday, July 11, 2016 at Brookdale Reidsville.

Funeral services will be conducted 11 a.m. Thursday, July 14, 2016 at First Presbyterian Church. Burial will be in Greenview Cemetery.

A native of Rockingham County, he was a son of the late Robert Payne Richardson, III and the late Lucy Irvin Richardson and had lived in Reidsville his entire life.

A graduate of Davidson College, affectionately known as “Boys Town,” he later attended UNC School of Medicine. A retired physician, and a US Army veteran, he was a member of First Presbyterian Church, where he served as an elder and loved the Montreat House.

He was a member of the Heritage Club of Annie Penn Hospital Foundation and was also a charter member of the Oak Island Golf Club.

Always a Southern gentleman, his kindness made everyone feel special. Things he loved most were first and foremost his family, his friends, caring for his patients, gin rummy with his friends, and playing golf.

He was dedicated to everything he pursued; he never missed a day of school. Irvin was a great storyteller, and whatever he lost on the golf course he would recoup in the card room.

Although he was known as “Runt” by many of his friends, he was a giant of a man.

Irvin was preceded in death by a daughter: Hunter Richardson Snow and a brother: Robert Payne Richardson, IV.

The family will see friends 6 till 8 p.m. Wednesday July 13, 2016 at First Presbyterian Church and at other times will be at the home.

The family would like to thank the staff and management of Brookdale Reidsville and Dr. Roy Fagan, who lovingly cared for Irvin.

Citty Funeral Home is in charge of arrangements.Online condolences may be sent to: www.cittyfh.com