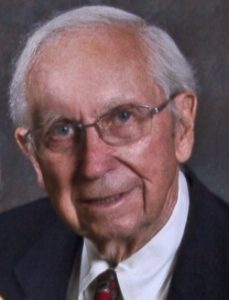 A service of remembrance, officiated by the Rev. Elizabeth Ayscue, will be held at First Presbyterian Church in Albemarle at 1 p.m. on Saturday, June 11, 2016. The family will receive friends in the church parlor following the service.

Mr. Ivey was born in Albemarle on January 8, 1930, the son of J. Wallace “Hawkeye” Ivey and Kathleen Lisk Ivey.

Raised in New London, he moved to Albemarle as a teenager and graduated from Albemarle High School. He attended Davidson College and Pfeiffer College and then served four years in the US Air Force in Valdosta, Ga., Greenville, S.C., and Biloxi, Miss., in air traffic control operations and as an instructor.

In 1956, Mr. Ivey married Margaret Barrett, and they raised a family, enjoyed many years of travel, time at their beach home in Oak Island and invaluable years with children and grandchildren and their beloved English springer spaniels.

Mr. Ivey was an avid reader and loved anything associated with the out of doors — fishing, camping and boating. He also loved a good joke, and his dry sense of humor got many laughs. He was a man of few words, but those words spoke volumes.

When he was 15 years old, Mr. Ivey saved the life of a friend in a boating accident and was awarded the National Boy Scout Life Saving Gold Medal and a certificate of heroism from the National Court of Honor, signed by the President of the United States. He was later honored with the Carnegie Bronze Medal of Heroism. He became a lifelong supporter of the Boy Scouts of America and was a local troop leader, instructor and volunteer.

He loved being active in the community, serving as elder at First Presbyterian Church, participating in the Optimist Club and supporting many community charities.

Mr. Ivey was on the board of the New London Historical Museum and served as a volunteer, always ready to share his memories of his childhood home. In 2014, he gifted acreage on Main Street in New London to the town.

Mr. Ivey is survived by his devoted wife of 60 years, Margaret Barrett Ivey, and his children, Jim Ivey III and wife Lori of Albemarle; and daughter Dale Ivey Stoehr and husband Larry of Greensboro. He was especially proud of his four grandchildren: William Ivey, Robert Ivey, Claire Ellison and Kathleen Ellison. Mr. Ivey is also survived by his sister, Ann Ivey Cranford and husband, Charles, of Oak Island, along with many special nieces, nephews and cousins.

The family is grateful for the love and support offered by neighbors, friends, church and community and expresses deepest appreciation to Mr. Ivey’s dedicated caregivers, Teresa Maslowski, Jessica Mosby, Karen Sarver, Patsy Yarborough and to Hospice of Stanly and the Uwharrie.

Memorial contributions may be made to First Presbyterian Church Albemarle, Hospice of Stanly and the Uwharrie or the Boy Scouts of America. ­

Hartsell Funeral Home of Albemarle is serving the Ivey family.

Online condolences may be made at www.hartsellfh.com.