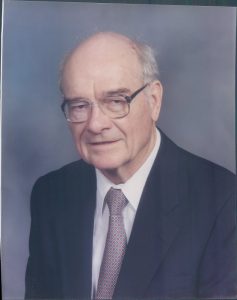 A memorial will be held Tuesday, June 14, 2016 at 11:00 a.m. at Trinity Presbyterian Church in Laurinburg. The family will receive friends immediately following the service at 12:00 pm at Scotia Village.

He was an honor graduate of Davidson College where he was president of the YMCA and captain of the wrestling team. He attended Louisville Presbyterian Seminary where he received a Masters of Divinity degree followed by three years of service as a chaplain in the US Army in Korea. He then attended Harvard University where he received a Masters degree in theology and studied under Paul Tillich. He then received his PhD at Princeton Theological Seminary.

Immediately following his graduate studies, he joined the faculty of the newly established St. Andrews Presbyterian College in 1961 where he taught until 2012. While there he helped create the Christianity and Culture curriculum (C&C) and taught a variety of classes in the humanities. He was widely recognized as an engaging and thoughtful teacher who cultivated critical thinking and interdepartmental collaboration in his many popular courses.

He was moderator of the Fayetteville Presbytery and served many congregations as a visiting pastor. Over 50 years he donated over 22 gallons of blood, giving at every opportunity. He enjoyed traveling with his wife and grandchildren all over the world, and had a special interest in the cave paintings in France and Spain. His enjoyable pastime was “trouncing men half his age on the racquetball court”.

He was devoted to his family and is preceded in death by his sister Susan, his son David, and his granddaughter Hannah. He is survived by his loving wife of 63 years, Katherine (Kay) Alexander, son John and his wife Rose of Charlotte, NC, daughter Susan (Dorrie) and her husband Jack Gibson of Southern Pines, NC, and three grandchildren – Alexander (Alec) Gibson, Stephen and Keith Alexander.

In lieu of flowers, memorials may be made in Bill’s name to the academic scholarship fund at St Andrew’s University, 1700 Dogwood Mile St, Laurinburg NC 28352.

McDougald Funeral Home and Crematorium is serving the family.