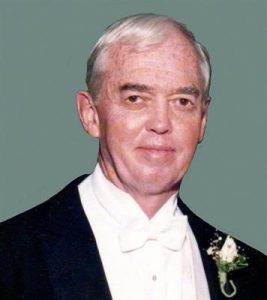 William Augustus Collins, Jr., known to many as “Bill,” passed away while sleeping peacefully, on the morning of April 1, 2016, at Carolinas Medical Center in Charlotte, N.C. He had struggled against Hodgkin’s lymphoma and pulmonary disease for approximately thirty months. He will be sorely missed by colleagues, friends, and family.

Mr. Collins was born on July 9, 1929 at 1503 Elm Street in Conway, S.C., the home of his maternal grandparents, Maude and Henry Wilson “H.W.” Ambrose, and his parents, Beatrice and William A. Collins, Sr. He moved with his family to Wadesboro, N.C. for several years, and then back to Conway, where he was graduated from Conway High School in 1946.

He attended the University of Oklahoma at Norman before transferring to Davidson College, where he earned a Bachelor of Science degree in Commerce in 1950.Soon after college, Mr. Collins enlisted in the U.S. Air Force, and was graduated from flight school at the rank of air cadet in 1953.

He was honorably discharged in 1956, having achieved the rank of first lieutenant, and having flown many non-combat missions. Mr. Collins continued to enjoy piloting planes and all things aeronautical for the remainder of his life.On December 29, 1955, Mr. Collins married the former Alla Eugenia “Gene” Wilson, in her hometown of Danville, Virginia, having met her through friends in Conway and Myrtle Beach.

Upon his discharge from the Air Force, Mr. and Mrs. Collins moved to Southern Pines, N.C., where Mr. Collins was employed by his family’s business, Collins Department Stores. He then moved with his young family to Mullins, S.C. for several years, before moving to Charlotte in 1960, where he and his wife remained residents for the rest of their lives.

In 1971, Mr. Collins left the employ of Collins Department Stores, where he had been promoted to president, in order to pursue running his own automobile dealership. He purchased the former Gathings Autos, and incorporated as Charlotte Import Cars, Inc. Through the years, his dealership has operated import car franchises such as Jaguar, MG, Triumph, Fiat, Volvo, and Saab.

The dealership is currently located at 7040 E. Independence Blvd. in Charlotte, where Mr. Collins continued to work until January of 2016. His daughter, Eugenia Collins Allen, currently manages the dealership, which continues to operate a Volvo franchise, and a certified service center for Saab.

Mr. and Mrs. Collins enjoyed the lives they built in Charlotte, where they were longtime members of Trinity Presbyterian Church, and had many wonderful friends and family members close by. Mr. Collins enjoyed his membership at Quail Hollow Country Club, where he was an avid golfer, and where members and staff treated him as family. Quail Hollow became a second home to him, after the death of his wife in 2003.

In addition to his daughter, Mr. Collins is survived by his brother, Charles Andrew Collins, of Myrtle Beach, S.C., his son, William Augustus Collins III, of Charleston, S.C., his grandson, Alexander Harrison Collins, also of Charleston, his step-grandson, John Rushing Welsh V, of Lexington, S.C., and John’s daughters, Virginia and Elizabeth Welsh, also of Lexington, as well as many cousins, nieces, and nephews, whom he cherished.

The family would like to thank Dr. Gary Frenette, Nurse Practitioner Theresa Carpenter, and everyone at Levine Cancer Institute who helped provide excellent care to Mr. Collins during his last years. The family would also like to thank pulmonologists Drs. Sachin Hansalia, Steven Kadiev, and Benjamin Bringardner, as well as staff doctors and nurses at Carolinas Medical Centers for their excellent care.

The family would also like to thank Mr. Collins’ housekeeper and personal assistant Daphne Reid, and his caregivers from Home Instead, especially his “Sweet Pea”, Andrea Lightfoot, for their devotion and commitment to Mr. Collins during his final years and months.

A graveside service at Lakeside Cemetery in Conway is planned to celebrate the life of Mr. Collins on Monday, April 11, at 2 p.m., with the Reverend C. Andrew Collins, Jr., presiding. A drop-in visitation luncheon will be held at the Cypress Inn, 16 Elm Street in Conway, from 11:30 to 1:30 prior to the service. Harry & Bryant Company in Charlotte, and Goldfinch Funeral Home in Conway are serving the family.