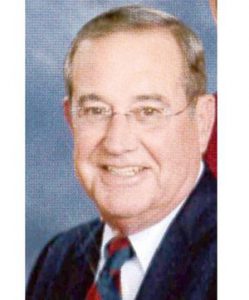 Sam was born in Fayetteville, NC on July 1, 1944 to William Kelly and Hunter Marie Hutcherson Gibbs. Sam’s parents returned to their hometown of Reidsville, NC when he was four years old. At about the same time, Ellen Williams and her family moved to Reidsville. Sam and Ellen grew up together. They eloped February 13, 1965 when they were juniors in college; after graduation, they married again in Reidsville in 1966.

Sam graduated from Reidsville High School in 1962 and Davidson College in 1966, where he was a member of Beta Theta Pi fraternity. He participated in ROTC while in college, and served two years in the United States Army following graduation.

During his service, Sam was stationed in South Korea. Ellen followed him there and was a civil service employee with the 8th Army. Sam received his MBA from the University of South Carolina in 1969. He then began a 30 year career with the legacy Wachovia Bank & Trust, earning his FCA designation in 1975. Sam spent his entire career with the asset management group, primarily as a bond trader and portfolio manager for institutional clients. Sam was a member of First Presbyterian Church and Forsyth Country Club.

After his retirement, Sam spent much of his time at Sunset Beach, NC. He cherished his grandchildren, and time at the beach with them was his greatest joy. They adored their Pop Pop and will remember him with much love.

Sam was predeceased by his parents and a brother, Kelly Gibbs Jr.

A memorial service celebrating Sam’s life will be held at 2:00 pm this Friday, February 5, 2016 at First Presbyterian Church in Winston-Salem, 300 North Cherry St. A reception following the service will be held in the church’s Fellowship Hall.