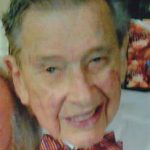 Dr. Thomas Jefferson Bell, Jr., 94, of Columbia, died Sunday, December 21, 2014. Born in Wampee, SC on June 14, 1920, he was the son of the late Mary Elizabeth McNeil and Thomas Jefferson Bell. He attended Conway Public Schools, completed two years undergraduate work at The Citadel, and graduated from Davidson College in 1942. He then attended the Medical College of Virginia, School of Dentistry, and served in the US Army and Air Force during the Korean Conflict.

Dr. Bell began his dentistry in 1946 in Davidson, NC later moving his practice to Columbia where he practiced for 47 years until his retirement in 2000.

The service for Dr. Bell will be held at 11 o’clock, Tuesday, December 23 in Keenan Chapel at Trinity Episcopal Cathedral with inurnment in the Columbarium at a later date. The family will be at the home and welcomes visitors there.

The family wishes to express their gratitude to Amedisys Hospice, especially Katie, Jackie, Rob, Laura and Tawanda, for their care of the Bell family.

Memories and condolences may be shared at ShivesFuneralHome.com.