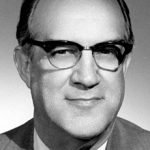 Allan W. Bosch, 91, of South Portland, died Dec. 21 at his home, surrounded by his family.

He attended Springfield High School, and was a Phi Beta Kappa graduate of Davidson College in North Carolina, where he earned a degree in history in 1947.

His time at Davidson was interrupted when Bosch served in the U.S. Army during World War II. He was a member of the 84th Infantry, and earned numerous decorations, including a Purple Heart, four Bronze Stars for meritorious service and a Good Conduct Medal.

In 1952, Bosch graduated from the University of Chicago with a doctorate in history and took his first teaching position at Westminster College in Salt Lake City, Utah. Eventually, he became registrar of the college, then served as dean of Marietta College in Ohio, and later, academic vice president of Western New England College in Springfield, Massachusetts. He retired in 1988.

While in Springfield, he was a member of the local Rotary Club, serving as its president for two years. In South Portland, he was a member of the First Congregational Church and sang in the choir. He also worked as a volunteer at Turning Point for Maine Medical Center. In his free time, Bosch enjoyed reading, solving crossword puzzles, collecting stamps and cheering for the Red Sox.

The family thanks Dr. John Reynolds for the years of service he offered and the support of the hospice staff of the VNA.

A funeral was held Dec. 29 at First Congregational Church, in South Portland.

In lieu of flowers, the family asks that donations be made to the Salvation Army.