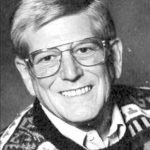 Peter Henry Ramm, 78, passed away Sunday, December 21, 2014 at his home. He was born in New York City to H. Henry Ramm and Katherine (Katie) Gravely Ramm. He moved to Winston-Salem at the age of 10. Peter graduated from high school at Episcopal High School (’54) in Alexandria, VA and college at Davidson College (’58).

He was a Lt. in the Navy from 1958-1962. He graduated from the University of Virginia Law School in 1965. After a period of time at a Norfolk, VA law firm, he came to Winston-Salem with RJ Reynolds Tobacco Company Legal Department in 1971. Peter retired from RJR in 1999.

Peter is survived by his wife, Ellen, sons, Chris Ramm (Suzanne) and Allen Ramm (Christy) and a daughter, Beverley Ramm. He is also survived by a stepson, John Huybers (Mimi) and several grandchildren. Peter is survived by a sister, Katherine (Kitsie) Ramm Tomkp (Ed) and also his golden retriever, Bella, who was a constant companion at his side. Peter was a master woodworker and made many treasured pieces of furniture. He also had a large rose garden and gave many of these flowers to Salemtowne Health Care Center and to the Forsyth Hospital Cancer Center.

The family wants to thank the people who went through this journey with us for all the food, cards, telephone calls, visits and especially our “puppy park” friends who would take Bella for her daily “play date” when we couldn’t. A special thanks to Dr. Eugene Paschold and Paula Norman, RN and so many others at the Forsyth Hospital Cancer Center for their continued support and love.

We also wish to thank Maggie Meginnis, RN and Lainey Bowen Hickey, CNA of Hospice for their exceptional care for Peter at home.

A funeral service will be held on Saturday, December 27, 2014 at 2:00 p.m. at St. Paul’s Episcopal Church with interment in Dalton Gardens after the service.

In lieu of flowers, memorials in memory of Peter, may be made to Hospice & Palliative Care Center, 101 Hospice Lane, Winston-Salem, NC 27103. Online condolences may be made through www.salemfh.com