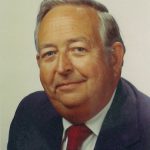 Albert G. Myers, Jr., 97 of Covenant Village passed away Tuesday, December 22, 2014 at his residence. . Mr Myers was born in Charlotte February 15, 1917 the son of Albert G. Myers, Sr. and Elfreida Nail Myers. He was preceded in death by his wife of 60 years Kittie Brownlee Myers. Mr. Myers was a life long member of The First United Methodist Church of Gastonia where he served on the Official Board.

Mr. Myers began his education at Davidson and received his BS degree from Erskine College. He completed the Executive Program at UNC Chapel Hill and received an Honorary Doctor of Laws from Belmont Abby College.

After returning from WWII where he served as a pilot in the US Army Air Corps, primarily in India and China, he went to work at Textiles Incorporated where he retired as Chairman of the Board in 1982. He also served on the boards of Jefferson Pilot Corporation and Jefferson Standard Life Insurance Company retiring in 1992.

Mr. Myers was also on the Board of Directors of Citizens National Bank which later became BB&T Financial Corporation, serving 25 years, retiring in 1987. He was past director and Chairman of the Carolina Motor Club AAA and a former director of Wix Corporation, Piedmont & Northern Railroad and Highland Container Corp.

He was a former Trustee of Gaston College, member of the Board of Advisors of Belmont College and Wake Forest University Babcock Graduate School of Management, Lees McRae College and Cannon Memorial Hospital in Avery County.

In his early youth, Mr. Myers was a councilor at the Bud Schiele Boy Scout Camp. That association with Mr. Schiele led to a life long love of scouting, serving as President of The Piedmont Council and later as Chairman of Region 6 Boy Scouts of America.

In addition to earning his Eagle Scout he was awarded the Silver Beaver by the Piedmont and the Silver Antelope by Region 6 BSC, Atlanta. Later he served as President of the Schiele Museum of Natural History.

One of his proudest achievements was serving as Chairman of the Board of Gaston Memorial Hospital during the original construction of what is now Caromont Health. He was honored in 1973 by The Gaston Civitan Club as “Citizen of the Year, in 1979 by Government of Gaston County with the “Distinguished Public Service Award”, and in 1995 by the Community Foundation with the “1995 Sims Award”.

The family will receive friends Friday, December 26, 2014 from 5:00pm to 7:00pm at McLean Funeral Directors of Gastonia. A Memorial Service will be held 11:00am, Saturday, December 27, 2014 at First United Methodist Church with Rev. David Christy officiating. The family will greet friends following the service in the Family Life Center. A private service of entombment will be held for the family at Gaston Memorial Park.