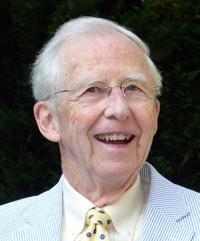 Born May 10, 1924 in Memphis, TN, to Eliza Woodside Gunn and Rev. Charles Groshon Gunn, he moved to Bluefield, WV, when his father became pastor of Westminster Presbyterian Church there. He attended Miss Blanche Miller’s Kindergarten and Continuation School; he graduated from Beaver High School.

Bluefield in those years was the rail hub of booming coalfields, and Charlie and his younger brothers came to love the sounds and sights of her railyards, station, and steam locomotives; this enthusiasm would stay with them throughout their lives.

It was in Bluefield, too, that he became acquainted with a girl named Ginny (Virginia Jackson), reputedly in the Westminster Church nursery; by high school days they were sweethearts.

Charlie left Bluefield in 1942 to attend Davidson College. World War II disrupted his college career, shifting him into the US Navy’s V-12 program for training doctors and transferring him to Duke University. He received his MD degree there in 1948.

By that time Charlie and Ginny were a married couple, and Charlie’s first job in medicine, as a substitute county health doctor, took them to Yazoo City, MS. The couple then moved to Detroit, MI, where Charlie served his medical residency at Henry Ford Hospital.

The year 1950 was a big one for Charlie and Ginny: the first of four sons was born, and six months later Charlie was called up to active duty in the Korean War. He served for ten months on a troopship, the USS Bayfield. Rejoining Ginny and Tommy, he finished his active Navy time in Portsmouth, VA. (Thereafter for decades he proudly remained in the Naval Reserves.)

Then came a period of moving around: the growing family spent a year in Davidson, NC, while Charlie circled back to finish his bachelor’s degree in English, and another year in Durham, for postdoc work in medicine. Charlie joined a private medical practice in Brevard, NC, but the experience of that year redirected him into occupational medicine.

He worked for two years at Ford Motor Company in Dearborn, MI, then returned south to Winston-Salem in 1957 to become medical director at Hanes Hosiery Co. It was here that his career as a physician hit its stride.

With the full support of the company president Gordon Hanes, Charlie developed a program of preventive care, employee education, and regular examinations that won national recognition; and he knit this all together with his own skills as an active listener and caring soul. He remained in this position through the evolution of the company into a part of Sara Lee Corp., until his retirement in 1986.

In Bluefield, Charlie and his two brothers had loved not only steam locomotives but also automobiles. One of their games had been to sit on the curb with closed eyes and distinguish passing cars by sound alone. The work at Ford gave Charlie a loyalty to Ford products, and he was ready when the first Mustangs hit the market. Many recall with delight riding with Charlie at the wheel in his beloved Prairie Bronze 1965 convertible, top down. He loved to clean and wax it, or any other car.

Since youth he had made paintings in oil, acrylic, and watercolor; many were of buildings that caught his fancy. The writer takes his masterpiece to be one called “Detroit Portrait.” Charlie was a woodworker. With his speckled green Dewalt radial-arm saw and the hand tools his father had given him at age twelve, he turned out such objects as matching pinewood desks for the four sons.

He finished out a small cabin on a lot at Lake Norman and built a pier. This place became a haven of relaxation for Charlie and Ginny after his retirement; and even after they sold the property, they maintained the practice of taking “lake days,” with breakfast at IHOP and no scheduled events for the day.

Retirement turned Charlie loose into his many interests. He was never at a loss for something to do or to learn about. He wrote lyrics and music for a musical play called “Homicidin,” about a vaccine that prevents the taking of human life. The pièce de résistance of his retired years was a dioramic model of the Bluefield train station and adjoining street, crafted in meticulous detail at a scale matching his N-gauge freight and passenger trains.

Both Charlie and Ginny were longtime members of Highland Presbyterian Church and served there in numerous capacities over the years. Charlie was also a volunteer at Contact Helpline of the Triad, the Community Care Center, Meals on Wheels, and Habitat for Humanity ReStore.

Ginny passed away in 2008, and Charlie became a bachelor in the old house on Kenleigh Circle.

In 2011, he moved into an apartment in the Salemtowne Retirement Community. He shifted his creative energies into putting words together, especially for the residents’ group called Sparkcatchers. Tooling around the halls with his beloved Swedish walker, he had hellos for everyone. He is particularly remembered there for the song he broke into on every sort of occasion.

He was preceded in death by his wife of 61 years, Virginia “Ginny” Jackson Gunn; a brother, James W. Gunn; and a sister, Elizabeth Gunn Langrall.

A memorial service will be held at Highland Presbyterian Church in Winston-Salem on Saturday, October 6, at 2:00 p.m.

In lieu of flowers, the family requests donations be made to Highland Presbyterian Church.