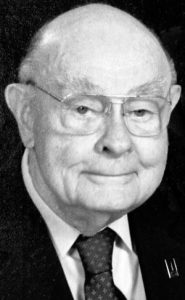 A memorial service for Leonard Menius, 99, of Lufkin, will be held at 11:00 a.m. Tuesday, September 4, 2018 at PineCrest Retirement Community, with Dr. Brian Wiggins officiating.

He attended schools in North Carolina, graduating from Davidson College in 1940, and later receiving a Master’s Degree from the University of North Carolina. He served in World War II as a U. S. Air Force pilot and Squadron Operations Officer in the China, Burma, India theater. He also served during the Korean War at the Human Resources Research Center in San Angelo, Texas, doing research in pilot training methods. He was discharged from the Air Force Reserve as a Lt. Colonel, having received the Distinguished Flying Cross, Air Medal with two clusters, and Asiatic-Pacific Campaign Medal with three clusters.

After his military service, Leonard was employed as a Personnel Analyst with Union Bag & Paper Corporation in Savannah, Georgia, and later as Director of Industrial Relations for Eastex Corporation. When Eastex was merged with Temple Industries and Inland Corporation, he served as Director of Industrial Relations for the Forest Products Division of Temple-Inland Inc., completing a total of 31 years of service with the company.

Business affiliations included the American Society of Personnel Administrators where he was classified Executive in Personnel, Chairman of Community Relations Service, Southwest Paper Industries, and Chairman of Southern Forest Products Salary Roundtable. He was a licensed Psychologist in Texas and in Georgia.

Leonard supported the Boy Scouts and was awarded the Silver Beaver award. He also enjoyed playing golf and was a member of the East Texas Seniors Golf Group for many years.

Leonard is survived by his sons, Robert and wife, Linda of Katy and Joe and wife, Amy of Plano.

In addition to his parents, Leonard was preceded in death by his wife, Helen in 2015; and sister, Opal Menius.

Condolences may be offered at www.gipsonfuneralhome.com

Services have been placed in the trust of Gipson Funeral Home.