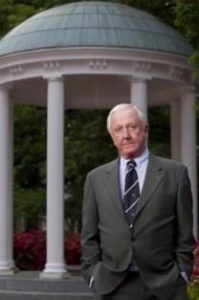 Hugh Alexander “Chip” McAllister, Jr. 79, passed away in his home and went to be with his Lord on June 15th in Houston, Texas. He was predeceased by his father, Dr. Hugh Alexander McAllister and his mother, Helen Louise Rinde McAllister.

Chip was born at Walter Reed General Hospital in Washington, DC and grew up in Lumberton, North Carolina. He received his undergraduate education at Davidson College and received his medical degree with honors from University of North Carolina School of Medicine in 1966.

Upon graduation, Chip joined the Army Medical Corps, completed his residency at Walter Reed Army Medical Center, and rose to the position of Chair, Department of Cardiovascular Pathology at the Armed Forces Institute of Pathology, rising to the rank of Colonel.

In collaboration with the existing chairmen of Cardiovascular Surgery, Cardiovascular Anesthesiology, Cardiology, and Pediatric Cardiology, he greatly strengthened the research and educational structure of the Texas Heart Institute. He also held appointments as Clinical Professor of Pathology at Baylor College of Medicine and the University of Texas Medical School.

Dr. McAllister received numerous awards for his contributions to cardiovascular pathology, including the Casimir Funk Award, the Distinguished Achievement Award from the Society for Cardiovascular Pathology and the Legion of Merit Award of the United States of America.

In the Armed Forces and in his subsequent career, Dr. McAllister was highly respected in cardiovascular pathology, both nationally and internationally and his interests spanned a wide spectrum of cardiovascular conditions. He was a frequent author of books and journal articles and his exhaustive atlas, Tumors of the Cardiovascular System(1978) – co-authored with Dr. John J. Fenoglio – stands today not only as a recognized classic in medical literature but as a work of enduring usefulness.

Chip “retired” in 2000, devoting tremendous effort to giving back to the University of North Carolina, where he established the UNC McAllister Heart Institute for research and clinical care. He also served as the president of the UNC Medical Alumni Association and was a member of the Executive Committee of the Medical Foundation of North Carolina and of the UNC Board of Visitors and he received the prestigious Davie Award for these efforts.

Chip had a deep love of Southwestern art and his extensive collection has been gifted to the Ackland Art Museum at UNC. He also loved nature and the outdoors and served on the international board and co-chaired the Marine Leadership Council of the World Wildlife Fund. He is listed as a major contributor to the Monterrey Bay Aquarium. The Spirit Waves Fountain on the campus of Davidson College ensures the McAllister legacy there.

Chip is survived by his loving children, Kimberley Usrey (Marty) and Leigh McAllister; his grandchildren, Colin and Chase Usrey; and his sister Elise “Bitsy” Lennon (Fred), his niece, Patricia Lennon Nicolas, and nephew, Daniel Alexander Lennon, and their families. He is also survived by his first wife Barbara McAllister and his close friends Carol and Richard Hutchens, as well as many friends in Texas, California, and North Carolina.

Chip leaves behind his beloved cats, Hansel and Gretel, as well has his devoted caregivers, Steve and Joy.

There will be a memorial service in Chapel Hill NC at the Chapel of the Cross on July 12 at 2 PM.

In lieu of flowers, the family requests donations be made in memory of Hugh A. McAllister, Jr to either:
(i) the World Wildlife Fund: www.worldwildlife.org/how-to-help or
(ii) the UNC McAllister Heart Institute: http://go.unc.edu/McAllisterHeartInstitute.