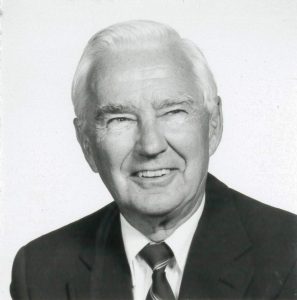 In addition to his parents, he was preceded in death by his wife of 65 years, Caroline Brown Bumbarger; and a brother, Paul William Bumbarger, Jr. Bob enlisted in the U.S. Navy immediately after high school graduation at age 17.

After basic training, he volunteered to serve on a PT Boat in the Atlantic Theater of Operations patrolling coastal shipping lanes to detect enemy submarines that were tasked with sinking American ships transporting men and equipment to Europe.

Following an honorable discharge from the Navy he attended Davidson College, where he was member of the golf team. He graduated Phi Beta Kappa in 1950. Bob returned to Hickory and began working in the family business, Bumbarger’s Inc.

He was an active member of First Presbyterian Church. Bob was an avid golfer and was a six-time club champion of Lake Hickory Country Club. He was also a huge sports fan, especially enjoying Davidson basketball. Bob loved nothing more than sharing funny stories with his family and friends.

Bob, better known as “Bobby” to his friends and family was always smiling with a twinkle in his eyes that put everyone around him at ease. To know him was to love him. He will be remembered for his hilarious “Sunshine” reports at Rotary and especially for his gentle spirit and kind heart.

A memorial service with military honors will be held at 2 p.m., June 14, 2018, at First Presbyterian Church, with the Rev. Heather Davis officiating.

The family will receive friends at the church following the service. A private burial will be held in Oakwood Cemetery. The Hickory Rotary Club and Hickory Coffee Club will serve as honorary pallbearers.

Online condolences may be left for the family at www.bass-smithfuneralhome.com.