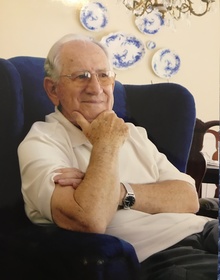 Dr. DuBose was born in Dazell in Sumter County on August 28, 1927, to the late Thomas Chalmers and Crawford Jenkins DuBose. He and his siblings went to live at The Thornwell Home for Children in Clinton when he was nine years old. Dr. DuBose went on to graduate from Thornwell High School and entered Davidson College in North Carolina.

After one year at Davidson, he enlisted in the U.S. Navy where he served for three years on the USS Goodrich in communications. He then returned to Davidson College and graduated with the Class of 1951. Dr. DuBose earned his Doctor of Medicine degree from the Medical University of South Carolina in 1955.

Dr. DuBose practiced medicine briefly in Camden, before coming to Blacksburg in 1957. This was where he met Miss Betty Lou Neal, whom he married on April 15, 1961. Dr. and Mrs. DuBose served the community in his medical practice until he retired from private practice in 1990. He went on to work for the South Carolina Vocational Rehabilitation Department in Greenville for three years.

Dr. DuBose was an active member of Blacksburg Associate Reformed Presbyterian Church, where he served as elder and was recently honored a Elder Emeritus.

He is survived by Betty’s aunt and uncle, Dorothy and Grady Thomas Childers of Grover, N.C., and many nieces and nephews.

In addition to his parents, Dr. DuBose is preceded in death by his brothers, Thomas Chalmers DuBose, Jr. and Benjamin Franklin DuBose, and his sisters, Marie DuBose Munn, Alice DuBose Fowler, and Myrtle DuBose Pease.

In lieu of flowers, memorials may be made to The Thornwell Home for Children, 302 South Broad Street, Clinton, SC 29325 or to Blacksburg ARP Church, 108 South Chester Street, Blacksburg, SC 29702.

The Book of Memories is available at www.gordonmortuary.com.

The Blacksburg location of Gordon Mortuary is serving the DuBose family.