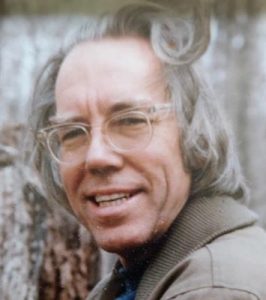 Henry and his wife, Daisy Wade Bridges, came to Charlotte in 1960, when he accepted a call to become the Organist and Choir Director of First Presbyterian Church.

Over the next half century, Henry enriched the cultural life of this community and introduced generations of children to the joy of music and art as he explored his passion for a life of service and care.

Bridges and Cornelia Shelby Thomas Bridges. He received a BA Degree in Music from

Davidson College in 1950. He studied for two years at Union Theological Seminary in

Theological Seminary in New York City. He studied organ for a year in Paris under Jean Langlais.

Prior to coming to Charlotte, Henry was Organist and Choir Director at Westminster

Henry Bridges founded Community School of the Arts in 1969, when he served as the organist and choir director of First Presbyterian Church in downtown Charlotte. The program was born after Henry realized that the Church had fifteen unused pianos in its basement and that it was surrounded by an urban neighborhood with children who could benefit from-but could never afford-high-quality music lessons.

Henry recruited four of the finest piano teachers in Charlotte as his faculty, and from more than 150 student applications, he accepted twenty children into the School’s inaugural year. Students received instruction free of charge five days a week, including two piano lessons, supervised practice, choir, sight singing, and music theory.

The quality of the instruction was exceptional, and Community School of the Arts rapidly expanded to offer tuition-based programs for families who could pay for lessons, in addition to the School’s free and discounted outreach programs.

Henry remained the executive director of the School until 1982, when he stepped away from administrative duties and became a full-time piano teacher in the Piedmont Courts Public Housing Project. Henry brought his personal piano to the site and taught free weekly lessons to dozens of Piedmont Courts students. Henry retired from teaching in 1992 but remained a lifetime member of the School’s Board of Directors.

From twenty students in 1969, the School has grown to serve more than 3,300 a year, and from four faculty members, the School has grown to employ over 45 dedicated instructors. While Community School of the Arts has expanded and changed throughout its almost five decades, it continues to teach extensively in low-income neighborhoods and provides significant student financial assistance, honoring Henry Bridges’ founding mission and the belief that outstanding arts education should be available to all.

Henry’s belief in the importance of compassionate service extended to all aspects of his life. A lifelong Presbyterian, he served his church, First Presbyterian, as an elder and clerk of session.

After retiring from Community School of the Arts, he became a regular volunteer for the Urban Ministry of Charlotte. Both Henry and his wife were honored as Life Members of the Mint Museum of Art, in recognition of their multiple contributions to the museum.

In 2004, he was the recipient of The Order of the Long Leaf Pine, in honor of extraordinary service to the people of North Carolina, the governor’s highest honor. Both his alma mater, Davidson College, and Queens University bestowed on him the honorary Doctor of Humane Letters degree.

In 1994, the Sertoma Club of Charlotte awarded Henry its Service to Mankind Award. Additional awards were from the Charlotte Community Concert Association, the Charlotte Arts and Science Council, and the 9th Congressional District Legacy Award which he received in 2005.

He served as Founder and Lifetime Board member of the Community School of the Arts, and Trustee and lifetime Honorary Trustee of the National Guild for Community Arts Education.

Rolfe Neill, former publisher of The Charlotte Observer, once observed that Henry Bridges was “Beethoven’s living Ode to Joy.”

Henry was a gifted musician who, in the musical terms, marched to the beat of his own drum. He cared little for the typical social norms, became vegetarian long before many people had even heard of the concept, and rode a motorcycle to Church to direct the choir. His favorite outfit was a good pair of jeans, a comfortable T- shirt, and his signature floppy hat. He also always wore a broad smile for everyone.

Whenever possible, he either walked where he wanted to go or took a public bus, and whenever he met someone in need, he always tried to help. If someone on the street asked for money for food, he took them to a restaurant to share a meal. If someone needed bus money to get home, he took them to the bus station to help buy the ticket. Inspired by the work of Teilhard de Chardin, he believed deeply in what he called “the highest state of evolutionary consciousness, unconditional love for all.”

A Memorial Service will be held 11am Saturday, March 24th at First Presbyterian Church in Charlotte. The family will receive friends following the service at the church.

In lieu of flowers, the family requests memorials be made to Community School of the Arts or Urban Ministry of Charlotte.