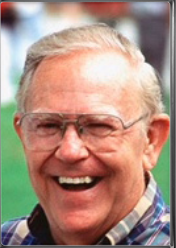 The Rev. Wilkes Dendy Macaulay, age 91, of Colfax, formerly of Asheboro, passed away on Tuesday, January 30, 2018, at River Landing at Sandy Ridge in Colfax, NC.

Wilkes was born in Seneca, SC on December 4, 1926, to Hugh Holleman and Josey Dendy Macaulay. He earned a bachelor of arts from Davidson College and a bachelor of divinity from Louisville Presbyterian Seminary in Louisville, KY.

After his freshman year, he entered the US Navy during World War II (1944-46) and returned to Davidson, where he graduated in 1949.

He was ordained as a Presbyterian minister in 1952, and served churches in Dekalb, MS, Kenly, NC, and Prospect Presbyterian Church in Mooresville, NC. In 1966, Wilkes accepted a call to First Presbyterian, Asheboro, where he served until his retirement in 1987.

In addition to his parents, Wilkes was preceded in death by his brother, Dr. Hugh Macaulay, Jr., and grandson, Andrew Lane.

He changed lives wherever he went, with his sunny disposition, easy charm, warm spirit, great stories, and his enormous heart. He always had a way of making everyone feel welcomed and comfortable. He would never talk about himself but always was genuinely interested in others.

He was a man of humility and strength. He also had the courage to preach on difficult subjects, including social issues such civil rights, an unpopular topic in his Mississippi church in 1954 and later in the 1960s.

After he retired, he served as parish associate at First Presbyterian, St. Petersburg, FL and travelled around the world with the love of his life. He delighted his grandchildren early with his magic tricks (especially the magic mouse he made out of his handkerchief), singing, playing the marimba, and later with his adventurous spirit, rafting, swimming, playing games/cards, and taking them to Scotland.

He was always curious about the world, staying on top of the latest technology for as long as he could. In his later years, even as he lost his sight, he continued his interest in learning, listening to books on tape particularly enjoying science, history, and his Scottish heritage.

As a father, he taught his children and grandchildren the importance of kindness, loving one another, compassion, honor, respect, and decency.

Above all, he was a man of deep faith, a patient, kind-hearted human being, seeing the best in people, on a mission to share light and love with everyone who crossed his path and leaving a lasting impact on many. His eyes were his final gift for research in macular degeneration.

A service of witness to the Resurrection will be held on Sunday, February 4, 2018, at 3, followed by a reception at First Presbyterian Church, 420 West Walker Avenue, Asheboro with Rev. Brian Gawf, Rev. Dr. Art Ross, and Rev. Dr. Clay Macaulay officiating. Burial will be held at a later time in the Oconee Memorial Park, Seneca, SC.

The family would like to thank the staff of River Landing Retirement Community, especially the staff at St. Andrews and Muirfield, for their kindness and the care given to Wilkes during his time there.

Remembrances and online condolences may be made at www.pughfuneralhome.com.