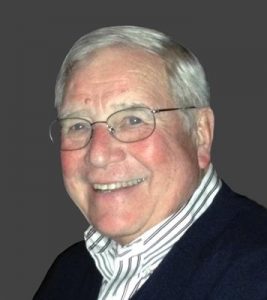 Theodore Glenn Hartsock, Jr., age 83, departed this life on February 12, 2018 to be with his Lord and Savior after a long battle with declining health.

Ted was born on April 30, 1934 in Bluefield, WV to Theodore Glenn Hartsock and Margaret Watson Hartsock. Ted attended Beaver High School where he played football and baseball. He went on to attend Davidson College and was a member of Phi Delta Theta fraternity. He then transferred to the University of Alabama and graduated in 1956.

Ted moved to Charlotte in the late 50’s and married Sarah Ann Mills in 1960. They were married 50 years and had four children. Beginning his professional career with Kaiser Aluminum, Ted pursued business interests in Charlotte as an entrepreneur with a focus on sales and marketing. He started a business selling automated office equipment and then moved into the business computer industry.

In the 1980’s his business was listed as one of the top 500 fastest growing small businesses in the US. Ted was active in politics in the early sixties when he served as Executive Director of the NC Republican Party and ran for the NC House of Representatives in 1964. He was a co-founder of Mecklenburg Aquatic Club in 1972 and was co-chairman of the Charlotte Mecklenburg Aquatic Commission that resulted in the beginning of the Mecklenburg Aquatic Center in downtown Charlotte. He was an active member of Christ Episcopal Church where he served on the vestry.

Ted was an avid golfer and enjoyed longtime friendships from his years playing golf at the Charlotte Country Club and Yeaman’s Hall Club in Charleston and the Piedmont Club. He particularly enjoyed several opportunities to play pro-am events and only late in life did he begin to use woods off the tee.

Ted has ten grandchildren who were a great joy to him: Langdon, Thomas and Charles Hartsock; Laura and David Dwight; Anna, Lucas, and William Spickard; Christopher and Peter Keller.

The family is grateful to the compassionate staff and caregivers at Waltonwood – Cotswald, and Hospice & Palliative Care.

A memorial service celebrating Ted’s life will be held at Christ Episcopal Church in Charlotte, NC at 2:00pm on Thursday, February 15, 2018. Burial will be at Magnolia Cemetery in Charleston, SC at 12:30pm on Friday, February 16, 2018.