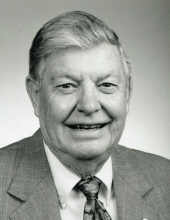 He was born in Haywood County’s Sunburst community, son of the late William Alfred and Ethel Ross.

Dick was educated in Haywood County Schools and Davidson College (1941–1943). He joined the US Army in 1943 during World War II, serving in the Air Corps as a navigator on B-24 bombers with the 8th Air Force based in England, attaining the rank of Second Lieutenant.

Dick returned home in 1945 and joined his father, W.A. Bradley, who operated a general merchandise business in Hazelwood.

Later, they were joined in business with his brother-in-law, Joe C. Cline, and the business became known as the Cline-Bradley Company, a hardware and farm supply business. They also operated Haywood Hardware in Canton and Lake Junaluska until son-in-law, Ron S. Breese, joined the business in 1985, the year Dick retired.

He was also on the board of the American Red Cross (1982–92), joined the board of trustees of Haywood Regional Medical Center in 1992 and served as its chairman until 2000.

Dick is survived by his wife of 62 years, Emily McCracken Bradley; a daughter, Susan Breese and her husband, Ron; a son, Richard Lynn Bradley, II and his wife, Tammy; three grandchildren, Melissa Breese Palmer and her husband, Dustin, Bradley Hume Breese and Kristina Lynn Bradley; all of Waynesville; and two sisters, Elizabeth “Betty” Cline of Raleigh and Jean Ann Wells of Brevard.

Funeral services will be held at 2:00 p.m. on Monday, October 9, 2017 at First United Methodist Church with Reverend Dr. George Thompson officiating. Interment will be at Green Hill Cemetery. The family will receive friends from 12:30 until 2:00 p.m. prior to services at the church.

Memorials may be made to the First United Methodist Church Youth Program, P.O. Box 838, Waynesville, NC 28786.