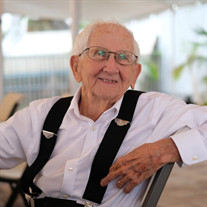 After high school he worked on Wall Street as a runner for the commodities markets.

While in New York, he joined a fife and drum corps, developing a life-long passion for music, a love that he instilled in his children.

During the Second World War he served in the Army Air Corps, operating the radar on the Northrup P-61 night fighter in the South Pacific.

Following the war, he attended Davidson College, where he earned a degree in accounting and met Mary Elizabeth Nisbet, the woman who would be his wife for 34 years. In 1947, he began a distinguished 26 year long career as an agent in the Federal Bureau of Investigation.

Posts took him and his growing family to Baltimore, Chicago, Puerto Rico, Miami and Mexico, but his and his family’s deepest roots were in St. Augustine, where he lived from 1955 to 1965 and, following duty in Mexico, again from 1973 to 2017.

During his 54 years in St. Augustine, Jack, as he was always known, was active in numerous community organizations, taking leadership roles in Memorial Presbyterian Church (as ruling elder and as youth group leader), the St. Augustine Orchestra, the Emil Maestre Music Association, and the St. Augustine Community Chorus. An avid golfer, he was a member of the Ponce Golf Club and the Shores Golf Course for over 50 years.

Following his retirement from the FBI in 1973, he began a second career in St. Johns County’s Vocational Technical Center, training future policemen and sheriff’s deputies in law enforcement as well as holding other administrative roles at the Center.

Not long after the death of his wife Lib in 1983, he retired from the Center, but remained active in the community through his love of music and golf. In 1986 he married Sarah Cottingham, and became a devoted step-father to two young girls, raising a second family in St. Augustine.

A memorial service will take place at Memorial Presbyterian Church, 36 Valencia St., St. Augustine, at 2 p.m. on Saturday, Sept. 30 with a reception to follow.

To send flowers or a memorial gift to the family of Jack Page please visit our Sympathy Store.