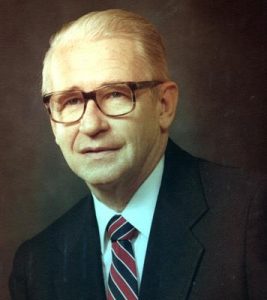 William Elliott White, 94, of Charlotte passed away peacefully on July 22, 2017 at the Stewart Health Center.

Born August 31, 1922 in Morganton, NC, he was the son of the late William Elliott White and Adelaide Avery Erwin White. Elliott was a proud graduate of The McCallie School, Davidson College (Distinguished Alumni Award in 1977), and Bowman Gray School of Medicine. His pediatrics career began in Charlotte in 1953 when he joined the practice of Dr. Charles Gay.

For the next 46 years, he served the local pediatric community, including service as Chief of Pediatrics at Mercy Hospital and Charlotte Memorial Hospital (CMC-Main). For many years following his retirement he enjoyed teaching and sharing his experience with the next generation, for which he was chosen as the first recipient of the Community Teaching Award, an award named for him.

On June 21, 1944 he married Shirley Marie Owens, his childhood sweetheart and the love of his life, who survives him. They were blessed to have 73 wonderful years together. He is additionally survived by daughter, Beverly Edwards (Smokey) of Atlanta, GA; son, Richard White (Glenna) of Charlotte, NC; grandchildren, James Edwards (Emily) of Atlanta, GA, Matt Edwards (Megan) of Richmond, VA, Avery White of Lincolnton, NC, and Anna White of Asheville, NC; and great-grandchildren, Jack Edwards and Davis Edwards of Atlanta, GA and Erin Edwards of Richmond, VA. He was predeceased by daughter, Adelaide Erwin White; son, William Elliott White III; and grandson, William Scott Edwards.

He had an amazing memory with the ability to recall intimate details about decades old events. He was particularly fond of sharing his knowledge of military history (particularly World War II) and sharing family history photos and stories with the next generations. He was proud of his military service as Captain in the U.S. Army Medical Corps.

He’ll be remembered for his love of family, strong faith, and his love and commitment to pediatric medicine. He was a lifelong supporter of Davidson College athletics and enjoyed playing and watching sports, particularly basketball and football. Some of his highlights include participation in Senior Olympics basketball, his record of attending 78 consecutive Duke-UNC football games, and attending the 1942 Rose Bowl in Durham, NC.

He was a member of Sardis Presbyterian Church and Myers Park Country Club.

The family wishes to extend their appreciation to the staff and caregivers of The Cypress for their support and loving care.

A service to celebrate Elliott’s life will be held at 11:00 AM Wednesday, July 26, in Harry & Bryant’s Chapel in the Oaks, 500 Providence Road. The family will receive friends following the service.

Condolences may be offered at www.HarryandBryantFuneralHome.com.