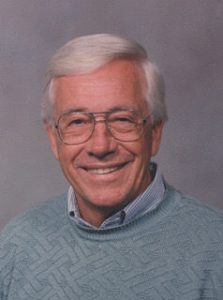 He was born December 21, 1928 in Donalsonville, Ga., son of the Reverend Coleaton Underwood Leach and Lois Baker Leach.

He married Nancy Phillips on March 28, 1953. A noted community activist and Presbyterian minister, Woody grew up in DeFuniak Springs, Fla.

His undergraduate education was at Davidson College where he was active in ROTC and attended on a football scholarship majoring in history and graduating in 1951. Woody then served in the United States Artillery Army including two years in Germany from 1953 to 1955.

He earned his Masters of Divinity from Union Theological Seminary in Richmond, Va. in 1958. Woody had a burning passion for social justice that was re-enforced by an association with the Rev. William Sloane Coffin during his sabbatical and Masters of Ethics at Yale in 1963-64.

In 1958 Woody began his 35 years of ministry in Blacksburg. He initially served under the Presbyterian Campus Christian Life Committee of Virginia. In 1964 the Presbyterian Westminster Fellowship merged with students of the Disciples of Christ Church. In the 1960s the program was very active as a crisis center to meet student needs.

In 1970 the ministry moved to 305 Washington Street and became known as Cooper House Presbyterian Campus Ministry. Woody was involved in the 1965 Prince Edward County, Virginia literacy project “Operation Catch Up” for African American school children victimized by Virginia’s massive resistance to racial integration. The project enrolled 520 children, with 37 teaching and administering the program.

He served one term on Blacksburg’s Town Council from 1978 to 1982 and was instrumental in the 1989 formation of the San Jose de Bocay, Nicaragua official sister city relationship with Blacksburg. He made many visits with other Blacksburg volunteers and Virginia Tech students to improve their local schools and increase safety through the building of fuel-efficient stoves for town residents.

His advanced professional education continued during summer sabbaticals: one at San Francisco Theological Seminary in San Anselmo, Calif. and another on a Danforth Scholarship at the Pacific School of Religion in Berkeley, Calif.

His special interests included enjoying conversations with friends and playing tennis. He was preceded in death by his adult son, Christopher “Chris” Underwood Leach, of California; his granddaughter, Ashley Dowdy, of Christiansburg, Va.; and sister, Martha O’Neal Leach.

A memorial service will be held at 2 p.m., Monday, July 10, 2017 at Blacksburg Presbyterian Church with the Rev. Charles Taylor of Blacksburg officiating and the Rev. Jim VandeBerg of St. Augustine, Fla. and Woody’s brother, Neil Leach of Asheville, N.C. assisting. Private inurnment of cremains with the family only will be held at a later date at Memorial Gardens of the New River Valley in Blacksburg.