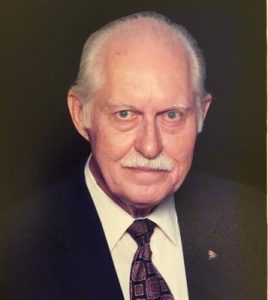 James Hampton Black, Sr., age 97, a descendant of John Morrison, a Revolutionary War Soldier and lifelong resident of Mint Hill, North Carolina, passed away on May 5, 2017.

Like his forbearer, Mr. Black was a true patriot, always honoring and respecting his country and state, volunteering for the US Army Air Corps, serving with the 15th Air Force in Italy in World War II, chairing the Mecklenburg County Selective Service (Draft) Board during the Vietnam War, and continuing on various veterans commissions until his late 80’s.

Mr. Black was born on July 5, 1919 in Mecklenburg County, the youngest child of Clinton Montgomery and Annie Wallace Black. His parents and his brother, Clinton Montgomery Black, Jr, preceded him in death. Mr. Black graduated from Bain High School and earned a Bachelor’s Degree from Davidson College in 1942. He retired as President of Central Piedmont Realty Company.

Mr. Black helped found VFW Post 4059 in Mint Hill and later supervised construction of the Post home. He was elected Post Commander, District Commander, State Commander, and later National Council Member. The VFW appointed him for over twenty years to present the concerns of veterans to the U.S. Senate and House of Representatives at the VFW Annual Washington Conference.

He worked with many U.S. Congressmen and Senators from North Carolina, who sought his informed opinion on veterans’ issues pending before Congress.

He endowed a scholarship to honor the winners of the annual VFW Voice of Democracy Essay Contest. Governor Jim Hunt appointed Mr. Black to the State Veterans Affairs Commission, where he was instrumental in developing the Veterans Home in Fayetteville, North Carolina.

In the 1960’s Mr. Black chaired the Bain School Board. He grew up in the historic Philadelphia Presbyterian Church, where he served as Deacon, Elder and Elder Emeritus. He was Treasurer of the Church for over a decade, devised a plan to sell church bonds in order to build a new sanctuary, and chaired the Finance Committee that made the sanctuary a reality.

Mr. Black was a 50-year member of the Masonic Order, Scottish Rite Bodies, and Oasis Temples of the Shrine.

He was a Past Master of both the Mint Hill (founder) and Mathews Masonic Lodges. In 1984, he helped co-found the Mint Hill Historical Society and served as a Trustee until age 89. He urged the Board to purchase the house and lot for what became the extraordinary Carl J. McEwen Historical Village.

He was also instrumental in locating a County Hot Meals Program at Philadelphia Presbyterian Church, and “Mr. Jim” served meals nearly every day for over a decade.

Mr. Black proudly carried the Bain Cane as his father had over fifty years ago, as the oldest man in the Church.

A memorial service was held on Sunday, May 7, at 3:00 p.m., at Philadelphia Presbyterian Church in Mint Hill, with interment following in the family plot at the Church cemetery.

In lieu of flowers, memorials may be sent to Philadelphia Presbyterian Church, the Mint Hill Historical Society or charity of donor’s choice.