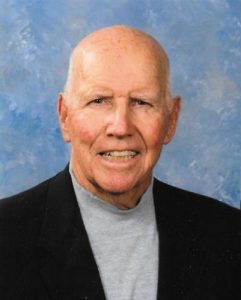 Corvin Hopkins “Corky” Clark of Birmingham, AL died on April 26th, 2017. The son of Robert Eugene Clark and Marion Hopkins Clark, Corky was born on May 18th, 1933 in Utica, NY.

Corky attended high school in Harrisburg, PA and Charlotte, NC. He went on to attend Davidson College, graduating with a Bachelors of Science Degree in Business Administration. In his senior year, Corky led the Davidson College Tennis team, in winning both the Southern Conference tournament Singles and Doubles titles.

Following college, he served in the US Army, where he was a paratrooper with the 101st Airborne, stationed at Fort Benning, GA. On May 19th, 1959 he married a fourth generation Floridian, Greta Sims Clark. They proceeded to live in Gainesville, FL; Camp Hill, PA; Allentown, PA and Chattanooga, TN prior to moving to Birmingham, AL in 1981.

Following their move to Birmingham, he was employed by and retired from National Cement Company, where he was Vice-President of Sales.

An accomplished athlete, Corky continued forward with his love for tennis, playing with all of his children, his friends and competitively across the Southeastern United States. During his competitive years, he won numerous State Age Group Singles and Doubles titles. His love for tennis also extended to his volunteer spirit.

He was passionate about bringing the game of tennis to the inner city youth of Birmingham. He was a founding member of BATA (Birmingham Area Tennis Association), and also served for many years on the board of the James Lewis Tennis Scholarship Foundation.

In addition to his love for tennis, Corky was an avid golfer, playing most of his golf at Vestavia Country Club where he was a member for many years. Beyond his love of sport, he was a dedicated volunteer. His service to community included many years as a member of the Rotary Club, where he was named a Paul Harris Scholar.

He was passionate about his interaction and fellowship with international students at UAB. He was instrumental in starting ‘Lets Talk’ at South Highland Presbyterian Church, with the goal of enhancing the conversational English skills of his International Student friends. Countless numbers of his international friendship partners were regulars at his family’s Thanksgiving Dinner.

As a member of South Highland Presbyterian Church for many years, he served as an Elder and on the Board of Directors for both the Child Development Center and Southside Shepherd’s Center.

In his earlier years, he also served as an Elder at three other Presbyterian USA churches. After retiring from their careers, Corky and Greta also strove to live a life of grand adventure.

They were active travelers, accomplishing a longtime goal of setting foot on all 7 Continents, when they touched down on Antarctica.

He is survived by his wife of fifty-eight years, Greta Sims Clark, and their children and grandchildren: his son, Douglas Reynolds Clark and his wife Rhonda, their son Zachary, and step-grandchildren Hilari Sheffield and Joshua Sheffield; his daughter Marion Hopkins Clark Savic and her husband Milan, and their children Alexandria, Peter and David; his son Daniel McMullen Clark and his wife Andria.

He is also survived by his sister, Nancy Gallena and her husband Paul; two nieces, nephew and their nine children.

In lieu of flowers, the family requests that contributions be made to either South Highland Presbyterian Church (http://southhighland.org/giving) or The James Lewis Tennis Scholarship Foundation (http://jltsfi.com/donate.asp).

A memorial service for Corky will be held at South Highland Presbyterian Church at 11am on Saturday, April 29th.