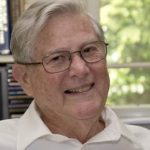 Jack Paul Etheridge, Sr., age 89, of Atlanta, Georgia, passed away peacefully on November 18, 2016, at his home after a brief battle with cancer.

There will be a memorial service at North Avenue Presbyterian Church in Atlanta on Sunday, November 27, 2016, at 1:00 p.m. Dr. Scott Weimer will officiate.

Judge Etheridge was born on March 16, 1927, in Atlanta, the son of Jessie Shepherd Brown and Anton Lee “Jack” Etheridge. He grew up on Peachtree Road in Brookhaven, and attended The Darlington School, Davidson College, and The Emory University School of Law. Eager to serve in World War II, he enlisted in the Merchant Marines and was deployed to the Pacific on a tanker; later, during the Korean War, he was commissioned as a Lieutenant in the Army.

Following the war, Dr. Vernon Broyles of North Avenue Presbyterian Church assisted Judge Etheridge in arranging a year in Germany during which he helped resettle war refugees. It was on the ship to Germany that he met the love of his life, Ursula Schlatter, who was traveling back to her homeland, Switzerland.

He courted her during his year in Europe and, once back in Atlanta, proposed to her after first composing a letter in Latin to Ursula’s father, a Protestant minister in Zurich, asking for his consent. She came to America in 1952 to marry Jack in the chapel of North Avenue Presbyterian Church.

He is also survived by his twin brother Robert Charles Etheridge, a former missionary for the Presbyterian Church, and Robert’s wife, Mary Elizabeth. He was predeceased by his sister Jessie Etheridge Summers, and is survived by Jessie’s husband Carl of Auburn, Alabama.

Judge Etheridge was a law clerk to The Honorable Frank Hooper, U.S. District Court, and The Honorable Ralph Pharr, Fulton County Superior Court. He practiced law with the firm of Smith, Kilpatrick, Cody, Rogers, McClatchey, and Regenstein before opening his own firm, Huie and Etheridge, with his dear friend W. Stell Huie.

During the 1960s, he served in the Georgia House of Representatives. He then followed in the footsteps of his beloved father, Judge A. L. Etheridge, by becoming a Fulton County Superior Court Judge.

Following his ten-year career on the bench, the Judge embarked on a teaching career, including serving on the faculty of the National Judicial College in Reno, Nevada; as Associate Dean of the Emory University School of Law; as professor in the College of Criminal Justice at the University of South Carolina; as an instructor at The Phillips Exeter Academy; and at The University of the Witwatersrand School of Law in Johannesburg, South Africa.

He was also a fellow at Harvard’s Kennedy Institute of Politics where he worked to develop a system of mediation as an alternative form of dispute resolution. The Judge was the founding Chairman of the Board of The Justice Center of Atlanta, which continues to offer mediation services and mediator training, and he opened the Atlanta office of Judicial Arbitration and Mediation Services (JAMS).

He is the author of the book, Getting to the Table, A Primer for Lawyers on Mediation Skills. In recent years, Judge Etheridge served as Special Master in several national class action lawsuits, including defective construction products and asbestos litigation.

Inspired by the example set by his beloved father, Judge Etheridge enjoyed serving his community and opening doors for others. He was a member of the Atlanta Rotary Club; a past president of the Atlanta Bar Association; and Chairman of the National Conference of State Trial Judges. He served on the Board of Trustees of Davidson College and of Atlanta University.

He was appointed to the Board of Directors of Fuqua Industries, Inc., Initiatives for Change based in Caux, Switzerland, and The National Endowment for the Humanities.

Jack’s hobbies included golf and flying planes when he was younger, and cooking classes and extensive international travel in later years. On weekends, he retreated to the family’s cabin on Lake Burton where he enjoyed reading, tending to his woodpile, and hiking with his grandchildren.

Throughout his life, he loved books, learning, classical music and opera. He especially enjoyed Thursday nights at the Atlanta Symphony with Ursula.

Please express condolences for the family in the comments section below. The Etheridge family is being cared for by Georgia Funeral Care and Cremation Services, Acworth, Georgia.