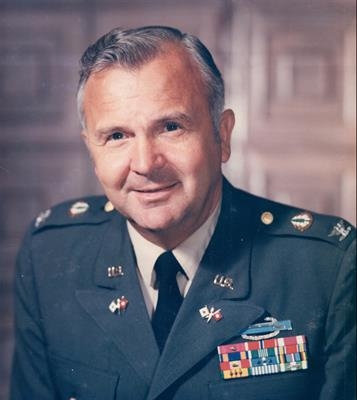 Charles Childers passed away on November 26, 2016 at the age of 89. He was a resident of the Cypress of Charlotte at the time of his death.

He was born on September 21, 1927 in Lenoir, NC to Charlie and Janie Childers. He married Sarah “Susie” Miller Matthews in June of 1953.

Chuck graduated from Davidson College in 1950 with a degree in Business Administration. He was commissioned as Second Lieutenant of Infantry in the US Army and served as a platoon leader and company commander during the Korean War. He was particularly proud to have served in the first racially integrated combat regiment.

Transferring to the Signal Corps in 1955, he served in various assignments all over the world including a tour of duty in Vietnam. He was a graduate of the US Army Command and General Staff College, the British Staff College, and the Industrial College of the Armed Forces.

He also earned a Master’s Degree in Commerce from the University of Alabama. He retired in 1977 as Colonel and worked in private industry for another 15 years, first at Digital Equipment Corporation and then the United States Telephone Association.

Chuck was preceded in death by his parents, his brother, Lee Austin Childers, and his son, Charles Matthews Childers. He is survived by his devoted wife of 63 years, Susie, his daughter Elizabeth Childers Smith, his son-in-law, Richard Smith, grandchildren Michael, Zachary, Noah, Rachel, and great grand-daughter Hayden.

In his later years, he spent his winters in Florida and summers in the mountains of NC where he grew up. He loved golf, listening to baseball on the radio, and a good martini. He hated yardwork and lima beans. He and Susie moved to the Cypress of Charlotte in 2011.

The family wishes to express special appreciation to the entire staff of the Stewart Health Center for their loving care, especially to Misty, Barsia and Aida.

A service to celebrate Chuck’s life will be held at McEwen Funeral Home (10500 Park Road, Charlotte) on December 8, 2016 at 3:00 pm. The family will receive friends at the Club House at Cypress of Charlotte at 5:00 pm following the service.

In lieu of flowers, please make donations to your favorite charity

in Chuck’s name. Private interment with military honors will be held in Arlington National Cemetery at a later date.

On-line condolences may be placed at www.mcewenpinevillechapel.com

Published in Charlotte Observer on Dec. 4, 2016