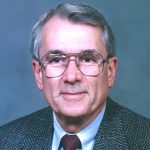 Robert “Bob” Brown was born January 7, 1933 in Statesville, NC, to the late Pauline White and C.B. “Sam” Brown. He was preceded in death by his brothers, Charles and Hal Brown.

Bob graduated from Scotts High School in Iredell County, attended Davidson College and then graduated from Erskine College in 1955. He graduated from UNC School of Medicine in 1959 followed by a residency at UNC in Pathology.

Bob served at the Armed Forces Institute of Pathology at Walter Reed in Washington, DC, until 1966. He conducted research at Oak Ridge National Laboratory in Oak Ridge, TN.

He practiced pathology and was Director of Laboratories at Rutherford Hospital for 10 years. He was awarded a grant which enabled him to manage a private laboratory for the purpose of cancer research. He practiced at Humana Hospital in Greensboro, NC, until he retired in 1987.

After retirement he served on the Board of Counselors at Erskine College. Bob and his wife, Mary, resided in Chapel Hill and Statesville. He was a member of University Presbyterian Church in Chapel Hill. Bob and Mary enjoyed traveling.

He was passionate about his pathology practice and research and the care of his patients. Bob remained a farmer at heart and enjoyed spending time at the family farm in Statesville. He was a devoted husband, father, grandfather and friend and a wonderful role model.

Bob is remembered for his smile, sense of humor, playing games and love for chocolate. He loved the family gatherings at the beach, mountains and lake. He was an artist, a craftsman, and avid Tarheel fan.

The family celebrated Bob’s life with a private family gathering on the evening of October 24.

Prior to his death Bob gifted his body to the UNC Chapel Hill School of Medicine Body Donation Program for the purpose of medical study and research.

In lieu of flowers, memorial contributions may be made to the Charlotte Neuroscience Foundation (which supports the Memory Center Charlotte), 300 Billingsley Rd., Suite 108, Charlotte, NC 28211 or to The Medical Foundation of NC, 880 Martin Luther King, Jr. Blvd., Chapel Hill, NC 27514 with the memo Robert Brown, MD – Department of Pathology for Cancer Research.