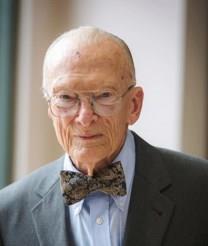 Lump attended The Hotchkiss School and Davidson College and graduated from Lehigh University in 1946.

Lump held various management positions with Richardson-Vicks Inc., including Treasurer, and was a Director of RVI for many years until it was sold to Procter and Gamble in 1985.

Lump had an immensely generous spirit. His philanthropic interests included the Hillsdale Fund Inc., of which he was president from its inception in 1963, and the Smith Richardson Foundation, which he trusteed for over 25 years.

Always active in his community, Lump was a Trustee of the Norwalk (CT) Hospital, Norwalk YMCA, Norwalk Maritime Aquarium, and the Norwalk Human Services Council.

Lump divided his time between Rowayton, CT and Greensboro, NC, with family vacations in Nantucket, MA.

He was a true southern gentleman, known for his bowties and crushing handshake.

Funeral services will be held at 1:00 pm Monday, August 29, 2016 at First Presbyterian Church in Greensboro. The family will receive friends at the church immediately following the service.

On line condolences may be made throughwww.haneslineberryfuneralhomes.com.