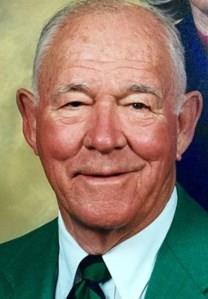 Funeral services celebrating his life will be held at 2 p.m. Friday, July 29, 2016 at First Presbyterian Church in Greensboro. The family will visit with friends immediately following the service in the Virginia Gilmore Room at the church.

A native of Wytheville, Virginia, he was the son of the late Randolph Moore Kabrich Sr. and Mattie Preston Wassum Kabrich.

He was preceded in his death by his wife Nancy Bogart Kabrich in 2012 after 58 years of marriage.

Randy served his country in the Pearl Islands of Panama as a second lieutenant in the U. S. Army from 1944 to 1946. After the Army he attended Davidson College and graduated in 3 years.

He moved to Greensboro and married Nancy Bogart in 1954. His first job after college was with General Electric. He later worked and retired from A. P. Hubbard Wholesale Lumber Company after 30 years of service.

Randy was a longtime member of the Summit Rotary Club and First Presbyterian Church in Greensboro where he served as an elder and deacon. He taught Sunday school classes at the church for many years. Some people in Greensboro still remember him as their first Sunday school teacher.

He also served as the Assistant Scoutmaster of the Boy Scout Troop at First Presbyterian Church. Playing tennis was his passion at Sherwood Swim & Racquet Club. After his retirement he enjoyed playing golf and traveling with his wife.

Mr. Kabrich is survived by his three sons, Randy, Bill and his wife Susie of Greensboro, NC, and Jim and his wife Laura of Charlotte, NC, his two sisters Preston Tothill of Portland, TX, Aileen Kennedy and her husband Whit of Waynesboro, VA.

He is further survived by his loving grandchildren, Christopher, William, Jack, Luke, Claire, and Case.

Online condolences may be made through www.haneslineberryfuneralhomes.com.