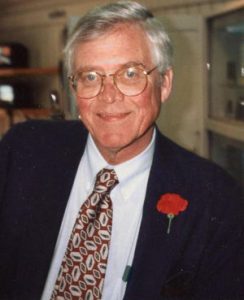 He was a graduate of Beaver (Bluefield, WV) High School in 1950 and Davidson College in 1954 after attending West Virginia University for his freshman year.

Following service in the U.S. Army in Korea, he spent most of his working life as a stockbroker in Roanoke, VA, many of those years for A.G. Edwards.

In later years, he and his wife Nancy enjoyed travel outside the United States and he was an avid follower of the Davidson College basketball program to the end.

A visitation will be held at Raymer-Kepner Funeral Home on Thursday, June 30, 2016 from 6:00-8:00 pm, followed by a private family service at a later date.

Memorials contributions may be sent to the charity of choice .