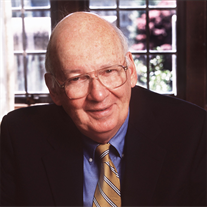 As a candidate for ordained ministry in the Methodist Church, he attended Duke University Divinity School, from which he received a B.D. in 1957.

In that same year, Smith entered the graduate school of Yale University to pursue a Ph.D. in New Testament. He completed this degree in 1961, with a dissertation entitled The Composition and Order of the Fourth Gospel: Bultmann’s Literary Theory.

This work marked the beginning of a career-long interest in the Johannine literature of the New Testament, about which Smith wrote a number of books and articles.

His most widely read book was Anatomy of the New Testament (1969), co-authored originally with Robert A. Spivey and, beginning with the sixth edition, co-authored also with C. Clifton Black. This book has been in print continuously since publication and is currently in its seventh edition.

Notably, Smith also served as editor of a series entitled Studies on Personalities of the New Testament. Smith’s first teaching position was at the Methodist Theological School in Ohio. In 1963, he and his family lived for a year in Zürich, Switzerland, a leave made possible by a Lilly Fellowship.

In 1965, Smith moved to Durham, North Carolina, and began his thirty-seven year career as a professor at Duke Divinity School.

In 1970, he received a Guggenheim Fellowship, spent the following year at Cambridge University in England, and returned to Duke in 1971.

During his tenure at Duke, Smith served as Associate Dean of the Divinity School, as the Director of Graduate Studies in Religion, and in 1987, he was named the George Washington Ivey Professor of New Testament. Smith taught more than 2,000 divinity students and directed twenty-four Ph.D. dissertations.

Among his former students are deans of theological schools, a college president, a bishop of the Christian Methodist Episcopal Church and a past president of the National Council of Churches.

In 1990, Davidson College conferred upon Smith an honorary Doctor of Letters degree, and, in 1993, Duke University named him the Scholar/Teacher of the Year.

In 1996, his friends and students presented him a Festschrift, Exploring the Gospel of John in Honor of D. Moody Smith, edited by R. Alan Culpepper and C. Clifton Black.

In 1999, Smith served as President of the Society of Biblical Literature, an association of more than 8,000 members in the United States and abroad. He was also a member of the International Society for New Testament Studies and the American Theological Society.

His family will remember him for his quick wit, his abidingly kind nature, his passion for tennis, his dedication to social justice and his devotion to his family.

The family wishes to express their deep appreciation to the staff of The Pines at Carolina Meadows and to UNC Hospice for the very compassionate and skilled care which they have provided since last September.