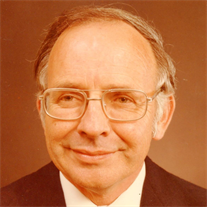 A memorial service will be conducted at the Presbyterian Church of the Cross, 1810 Phillips Avenue, Greensboro, on Saturday, June 4, 2016 at 1:00 p.m., followed by a time for greetings afterward.

The son of the late Rev. James William Miller and Marion Fraser Miller, he was raised in Clarkton, NC, spent summers in Hinesville, Liberty Co., GA, and was educated at Davidson College and Union Seminary in Richmond, VA. He served churches in WV, Fayetteville, NC, and the Presbyterian Church of the Cross in Greensboro for 47 years until retirement in 2010.

Active in church and community affairs, he served as Chair of the Greensboro Human Relations Commission, the Board of Adjustment, Presbytery’s Council, the Presbyterian Homes of High Point of North Carolina and various other agencies.Jim’s passions were for the care and development of children, pastoral care for the people of church and community, and the promotion of unity among all people.

Jim was awarded the Governor’s Order of the Long Leaf Pine, the GPD’s Citizen of the Year Award, and various other tokens of appreciation.Jim was a sports enthusiast, excelling in basketball, baseball, fast pitch softball, and golf.

Especially did he enjoy gardening and teaching others gardening. His method in whatever field was “teaching in a way that they did not know they were being taught.” Jim loved life and loved people and they loved him.

His survivors include his son James F. Miller, Jr. (Bo), his daughter Christy, his grandson Austin, and granddaughter, Olivia Ann.

He was predeceased by his spouse, Carroll Christian Miller, and a daughter, Linda Gordon Miller.

Online condolences may be made at www.forbisanddick.com.

Many thanks to his family and friends for their love and care, and to his co-worker, Merrie Cline Shelton, as well as Dr. Gray Clark, his successor. Forbis and Dick North Elm Street is assisting the Miller family.